Khabib Nurmagomedov is expected to withdraw from the UFC 249 card after being locked down in Russia.

UFC President Dana White is refusing to concede defeat in his pursuit of keeping UFC 249 alive, according to Khabib Nurmagomedov's manager Ali Abdelaziz. The promotion's fourth pay-per-view card of the year was initially scheduled to take place at the Barclays Center in Brooklyn, New York on April 18.

The coronavirus outbreak and the subsequent banning of mass gatherings in New York laid waste to those plans and has left the event without a venue. White has claimed to have found 'four or five' new locations for the card, which was due to be headlined by Nurmagomedov's long-awaited lightweight title fight with Tony Ferguson. Nurmagomedov's participation on the card, however, is in major doubt as he's currently on lockdown in Russia - who has introduced a blanket travel ban to curb the spread of COVID-19. Despite Nurmagomedov's meeting with Ferguson seemingly falling through for the fifth time, White is hellbent the card will still go ahead. 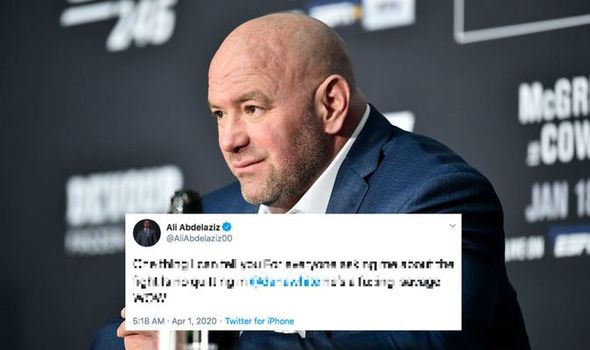 Khabib Nurmagomedov's UFC 249 clash with Tony Ferguson is on the verge of falling through again (Image: GETTY) 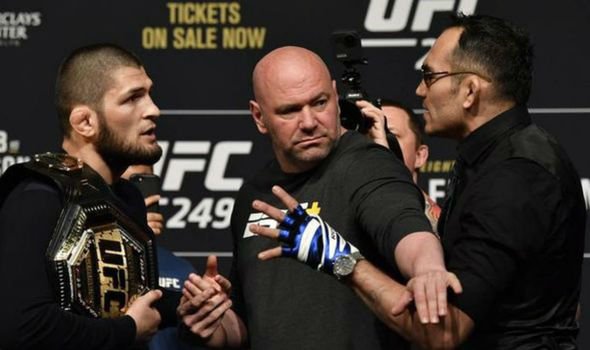 One thing I can tell you For everyone asking me about the fight Is no quitting in @danawhite he’s a f*****g savage WOW. Ali Abdelaziz on Twitter

And according to Abdelaziz, the UFC chief has been relentless in his bid to keep the card alive. He tweeted: "One thing I can tell you For everyone asking me about the fight Is no quitting in @danawhite he’s a f*****g savage WOW." The ongoing saga has been one of the toughest tests White, who remains steadfast in his belief the promotion will resume normal service a fortnight on Saturday. “The challenges are that every time I get something figured out, I wake up the next day and the world has completely changed again,” White said during an appearance on Frank Warren's Heavyweight podcast.

“Everything that I work hard on the day before, me and my crew, has now fallen apart. "It literally just happened to us again today. I woke up today and Khabib Nurmagomedov is in Russia and they just shut down all travel in and out of Russia. “I woke up this morning and the whole world f*****g changed again. "So back to the drawing board and we’re figuring this out right now as we’re speaking right now, I have people working on this thing as we speak.

Dana White is being relentless in his bid to save UFC 249, according to Ali Abdelaziz (Image: GETTY) 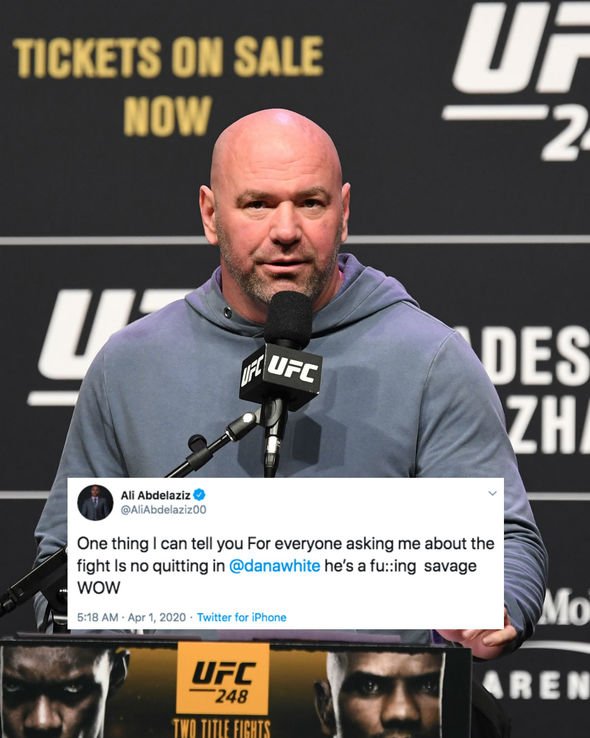 "Listen, I am absolutely f*****g relentless and I said that this fight is going to go on and it will.” Nurmagomedov, 31, revealed he was in lockdown during an Instagram live broadcast on Monday morning. He said: “We were training at (American Kickboxing Academy) without any information regarding the fight – where and how is it going to happen. “Then the UFC told us that the fight 100 percent isn’t happening in the States. And they said that 99 percent that it will happen in (the United Arab) Emirates – Abu Dhabi.

“After talking to the UFC, we decided to fly over to the Emirates a month before the fight. I don’t remember the exact date – it was (March) 19 or 20. I’ll have to check. "But when we landed in Emirates, we learned that they are going to close (the) borders and no one will be able to leave or fly in with (the) exception of residents. “So, we had to fly back to Russia. Currently, I am in Dagestan and I am training and preparing every day, although I don’t know what am I preparing for, because after we came to Russia we also learned that the borders are going to be locked. "Same as in the States, the same as in Europe, Emirates everywhere. The whole world is in quarantine right now.”