Forty seconds was all it took for Conor McGregor to reassert himself as one of the top dogs in the UFC. It wasn't that much longer before Floyd Mayweather announced a re-match in the boxing ring.

After months of anticipation and hype, McGregor didn't hang around in his return to the octagon - stopping Donald 'Cowboy' Cerrone less than a minute into their headline bout at UFC 246 in Las Vegas on Sunday (NZT).

Shortly after the bout, boxing great Mayweather was already teasing another match-up with McGregor in the ring with a post on Instagram. Their 2017 boxing bout earned both fighter upwards of US$100m each, according to reports.

McGregor said a rematch with Mayweather would happen during his press conference, but remained coy on where it could take place if it were to go ahead.

"Discussions are always ongoing, they never stop. You know Floyd and going through money fast. He's far from retired and that rematch will happen at some stage."

In Sunday's bout, where Bruce Buffer's fighter introductions took longer than the fight itself, McGregor managed to show he hadn't lost a step in his 15 months out of action, with speed and power still in his arsenal.

With blood running from Cerrone's nose, McGregor stepped back and landed an impressive head kick flush on Cerrone, and finished the fight off with his fists.

Cerrone was transported to the hospital immediately after leaving the octagon.

With the result, the former featherweight and lightweight champion can now say he has won by knockout in three weight classes and picked up his first win inside the octagon since winning the lightweight title from Eddie Alvarez in 2016.

The win poses questions over where McGregor's immediate future lies in the UFC, with possibilities of staying at welterweight or moving back down to lightweight.

McGregor, it seems to have more immediate thoughts on the octagon.

"I like this weight division, I feel really good…[but] I've definitely got work to do to get back where I was," McGregor said after beating Cerrone.

Cerrone, who has the most fights (34), wins (23), and stoppages (15) in UFC history, has now lost three straight fights by TKO. When asked about his future in the sport after the loss, the 36-year-old said he had no intention to stop fighting.

"I love this sport. I'm going to keep fighting; I don't care, it's just what I love," he said.

"I'm OK. That's to everybody for supporting me over the years; I love it. I don't know what else to say."

Earlier in the night, former bantamweight champion Holly Holm beat Raquel Pennington for the second time, backing up her 2015 win with a unanimous decision victory in Las Vegas. It was an important win for Holm, who had lost five of the seven fights she had since knocking out Ronda Rousey in 2015. 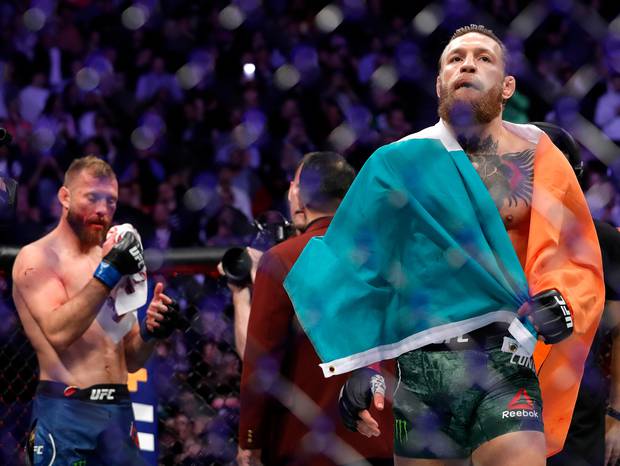 Aleksei Oleinik, a 42-year-old heavyweight who made his professional MMA debut in 1996, Brian Kelleher and Carlos Diego Ferreira also claimed big wins on the main card.

The biggest underdog on the card, 37-year-old flyweight Roxanne Modafferi, stunned the Las Vegas crowd in the featured preliminary bout when she claimed a one-sided decision win over the company's top flyweight prospect Maycee Barber. The previously unbeaten Barber injured her knee early in the second round, but Modafferi was already proving to be too good in the grappling game for Barber, who struggled once Modafferi was able to get the fight to the mat.

Sodiq Yusuff, Askar Askarov, Drew Dober, Sabina Mazo, and Aleksa Camur all picked up wins on the night as well Dober being the only one of the five not to need the judge's scorecard with a statement TKO win over Nasrat Haqparast.