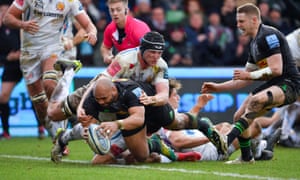 Chaos at the Stoop, as a fantastic contest concluded at the death with a Harlequins victory. The lead had changed hands throughout, especially in a second half that featured turn after turn. Exeter faced one passage of play, well after time and down to 13 men, but the final deed a penalty try at the umpteenth chaotic scrum settled the game in the home team’s favour five minutes after the clock had turned red.“It was one of our more important wins,” said Harlequins director of rugby Paul Gustard. “I was really impressed with the character of the team to keep going for the win when they could have settled for the draw.”

Repeatedly, Quins opted to scrum penalties, several after normal time with a three-point deficit and the posts beckoning. It was an all-out assault, which came off with that climactic penalty try. The bonus-point win takes Quins into the top six, from ninth, but Exeter remain clear at the top. Curiously, it was at the scrum they were found out, even as they ran in three fine tries with an aplomb more associated with Harlequins. 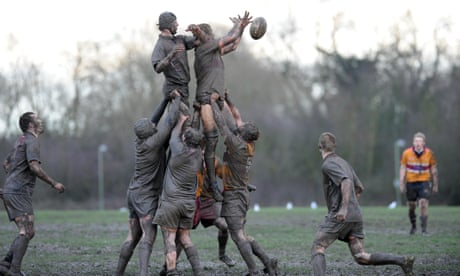 It looked as if they would do no more than pick up where they left off the weekend before, when they had put 50 past fellow play-off contenders Northampton. With pretty much their first stretch of possession, Phil Dollman dummied and broke inside Marcus Smith for a fine individual try in the third minute.The home side rode that indignity and started to flex their muscles. To begin with, the Quins scrum could do no wrong. Having won an early penalty, they won another within range, which Smith landed. Joe Simmonds replied almost immediately with a penalty before Harlequins levelled, again the points stemming from another scrum. They were scrumming penalties as early as the 20th minute, but at the site of the latest scrum penalty Danny Care, in his 200th Premiership appearance, tapped and fed the formidable Paul Lasike.There is not much arguing with the American on the charge and his path to the line was unbroken. Very direct, very Exeter.

A penalty apiece, albeit with Exeter’s scrum starting to win favour for no obvious reason, maintained parity at the break. Neither Exeter’s ascendancy at the scrum nor the parity was to last long. Quins repeated the scrum-Care-Lasike routine to set up Tevita Cavubati from close range.

Cue the Simmonds brothers. Sam cut inside Lasike like the centre he might have been in another life for a dazzling break, which was improved when brother Joe ghosted past four more tacklers to the line to draw Exeter level. Three minutes later, and Sam broke again, Elvis Taione charged deep into Quins territory, before Joe ghosted through again, past three this time, for Exeter’s third.Exeter’s Phil Dollman goes over over in the first half. 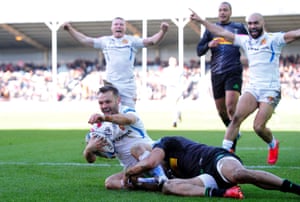 Quins levelled on the hour. Another scrum (instead of a simple shot at goal), and Alex Dombrandt fed Care who sent Smith on an arc round the Exeter midfield. Nick Auterac was shown the first of three late yellow cards, when he deliberately knocked-on after Joe Simmonds had split Quins’ defence once more. The latter landed the penalty that put Exeter ahead with quarter of an hour to go. The drama was only just beginning. Ollie Devoto’s high tackle on Smith meant he was next to go to the bin, with six minutes to go. Quins continued to take scrums for each penalty. With a minute to go, the referee apologized for awarding one too quickly when Care cross-kicked to an unmarked Gabriel Ibitoye with what should have been the advantage. From then on, any benefit of the doubt would go to the home side.

Alec Hepburn’s yellow card at the umpteenth scrum penalty reduced Exeter to 13 briefly, but there would be time for Devoto to return before the game was finally settled. The scrum splintered into chaos, and the referee marched to the sticks. An unsatisfactory way to win, perhaps, but appropriately dramatic.

Herschel Sale: Take Up to 50% Off Select Style Bags

What does women think being called girl gamers

Fortnite servers are back online

Alia Bhatt thanks Academy of Motion Picture Arts and Sciences

Stars Who Drew Backlash for Controversial Views on Coronavirus

Movie Kisses so Sexy it's Too Hot To Handle