Best luxury hotels in the US for your visit

If you're looking for a stateside getaway, the best places to go are Chicago or a Hawaiian island and the best hotel brand to stay at is Four Seasons, according to US News & World Report.For its just-released annual best hotels report, US News surveyed over 30,000 luxury hotels across North America, Europe, and the Caribbean. Only "luxury hotels," or hotels with more than 20 rooms and a 4-star "hotel class" rating, were eligible for ranking.Four thousand US hotels were then reviewed and ranked, based on a combination of travel expert awards and opinions along with guest satisfaction data sourced from TripAdvisor.The Four Seasons portfolio has five properties in the top 17 alone. Popular locations included Hawaii, Illinois, California, and Florida.Here's a look at the best luxury hotels to book a stay at in 2020, listed in ascending order of ranking. 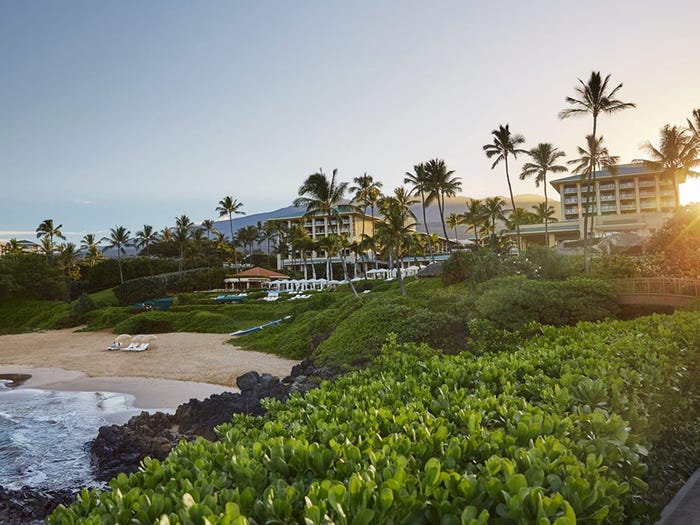 According to US News, guests are most likely to appreciate the award-winning spa, three golf courses, and recently renovated rooms with private balconies and patios. Four Seasons Resort Hualalai Four Seasons 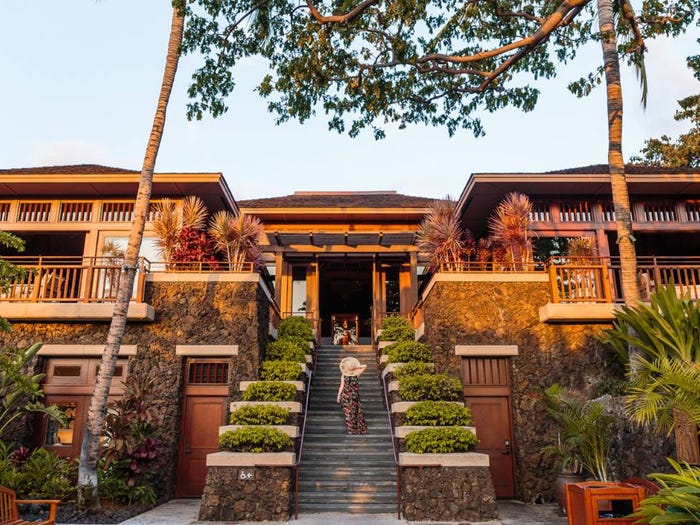 The 243-room resort frequently tops the US News ranking last year, it ranked No. 1. The golf course on property was designed by Jack Nicklaus and serves as a stop on the PGA Champions Tour. The resort also has seven swimming pools and an expansive art collection. Four Seasons Hotel New York Downtown Four Seasons 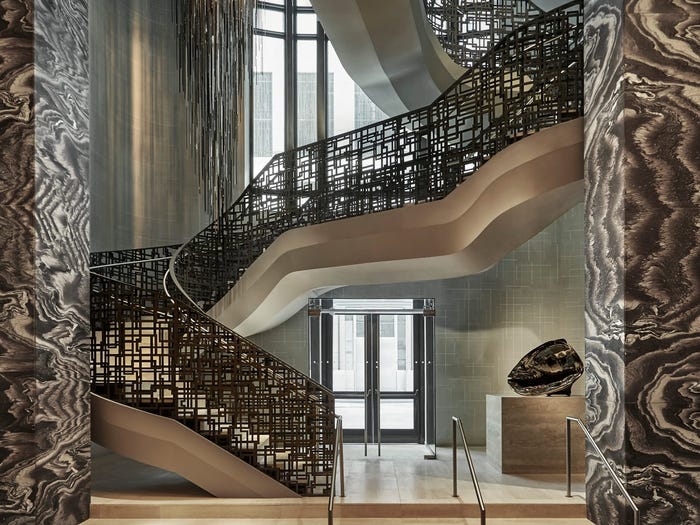 The hotel spans 24 floors of an 84-floor Tribeca building. It has all the signature Four Seasons amenities including a full-service spa and a Wolfgang Puck restaurant. The Broadmoor Getty Images 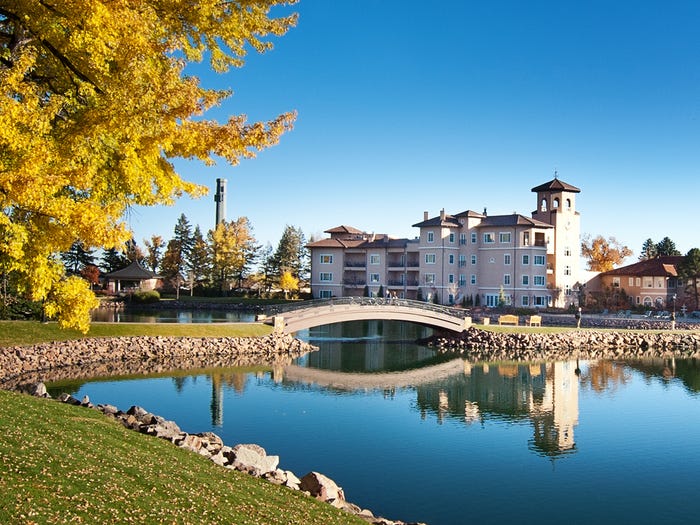 John D. Rockefeller was The Broadmoor's first guest in 1918, and the hotel has remained just as extravagant. It has tennis courts, a spa, and two championship golf courses. The Peninsula Beverly Hills Peninsula Hotels 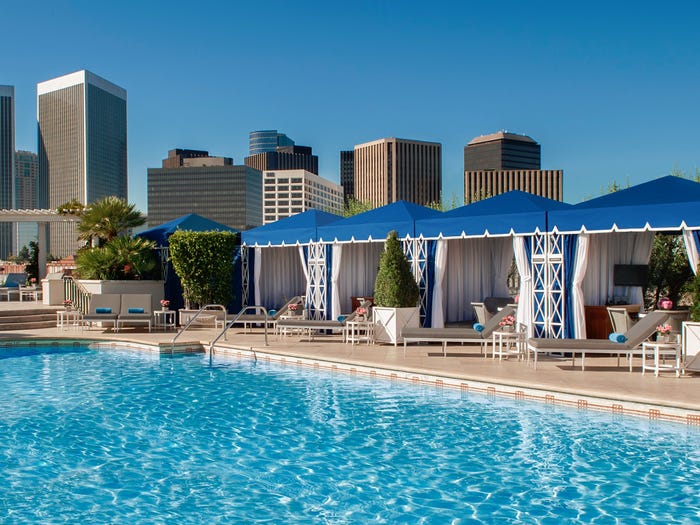 Insider Picks found that "The Peninsula is where you stay in L.A. when you want to feel like a movie star, and have the budget to pay for it too." The Peninsula Beverly Hills was also named as the home of one of the best hotel bars in the US, according to Forbes travel experts. The Lowell Hotel New York The Lowell 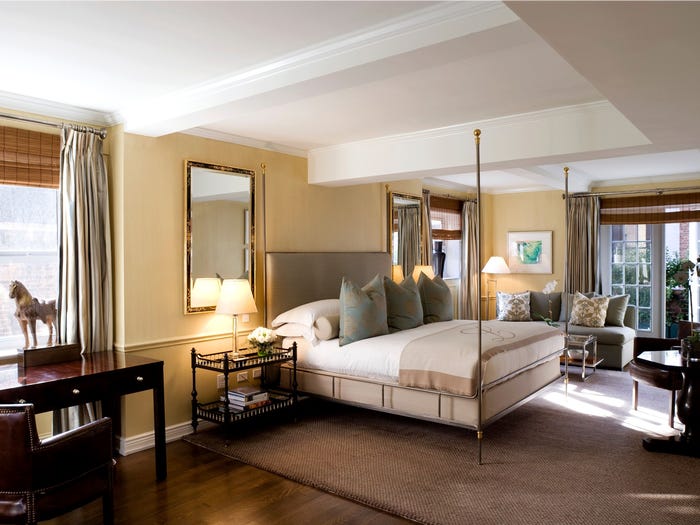 The Lowell, a boutique hotel on the Upper East Side, was billed by US News as having cozy interiors with a "serene, elegant ambiance," accompanied by extras like afternoon teatime. Wentworth Mansion Wentworth Mansion 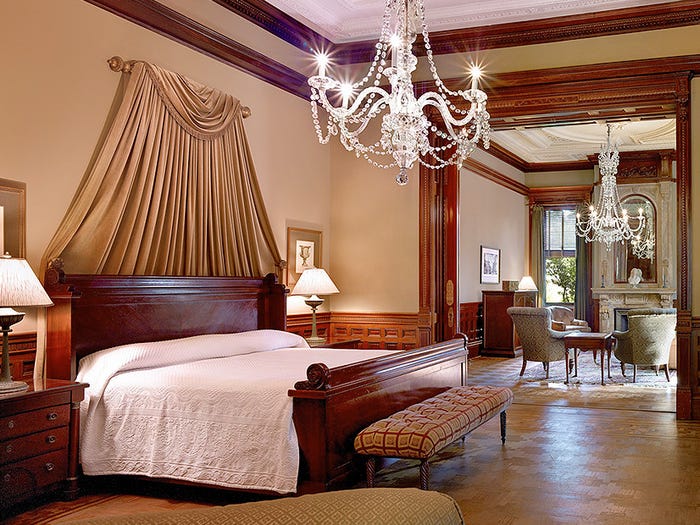 The Wentworth Mansion is a boutique hotel in Charleston's historic quarter, filled with old Southern architecture and decor. It's been referred to as the most famous hotel in the state of South Carolina. Hotel Emma Hotel Emma 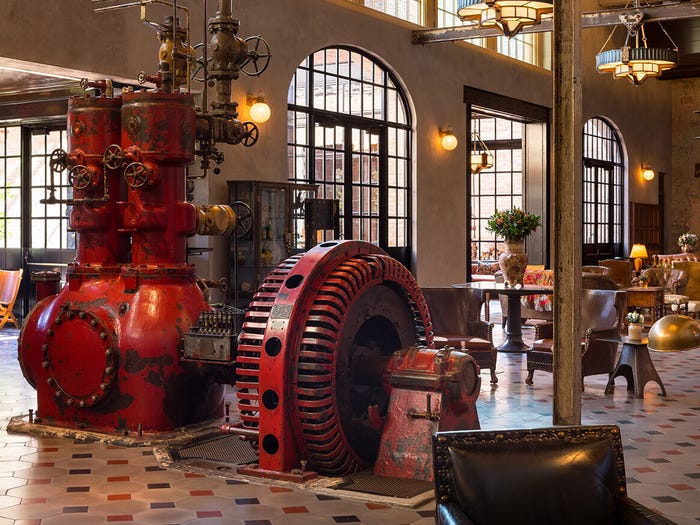 Hotel Emma was once the largest brewery in Texas its namesake is the woman who kept the brewery open during Prohibition by prioritizing dry cleaning and auto repair while brewing beer behind the scenes. Today, the hotel features the structure's original industrial design. Four Seasons Hotel Chicago Four Seasons 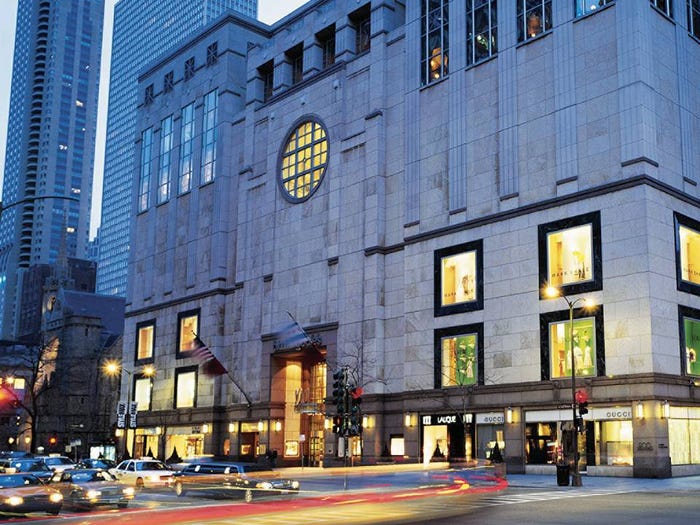 Situated on famous Michigan Avenue, the Four Seasons is close to all of Chicago's top dining and shopping. The hotel has a popular upscale restaurant, luxurious soundproofed spa treatment rooms, and rooms with lake views, according to US News. Four Seasons Hotel Washington, DC Four Seasons 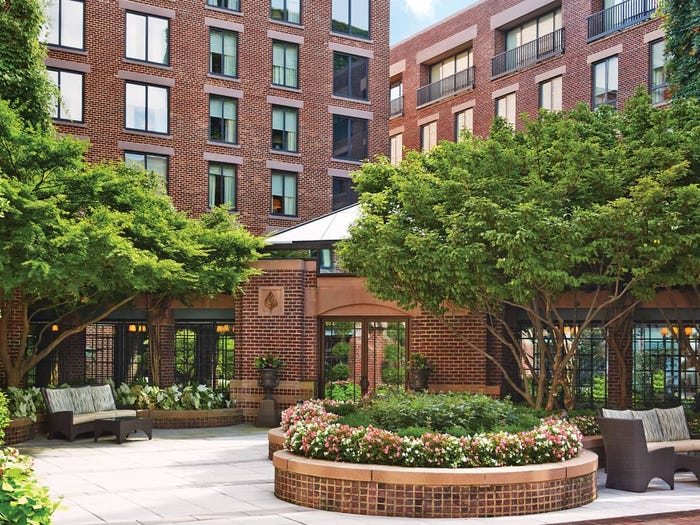 The Four Seasons in Washington, DC sits in the trendy Georgetown neighborhood. Similar to the other Four Seasons on this list, there is an upscale in-house restaurant and lavish spa. US News also noted that recent guests said "personalized customer service was a large reasons for return visits." Montage Kapalua Bay Montage 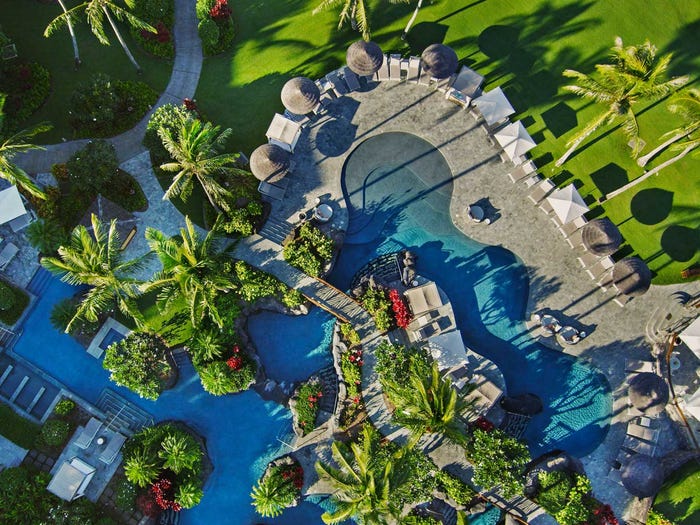 The Montage Kapaulua Bay is a 24-acre property with ocean views in Northwest Maui. The resort offers a variety of activities, including snorkeling, zip-lining, tennis, and golfing. Every accommodation is a suite with separate living and sleeping areas, making a stay particularly luxurious. Rancho Valencia Resort & Spa Rancho Valencia 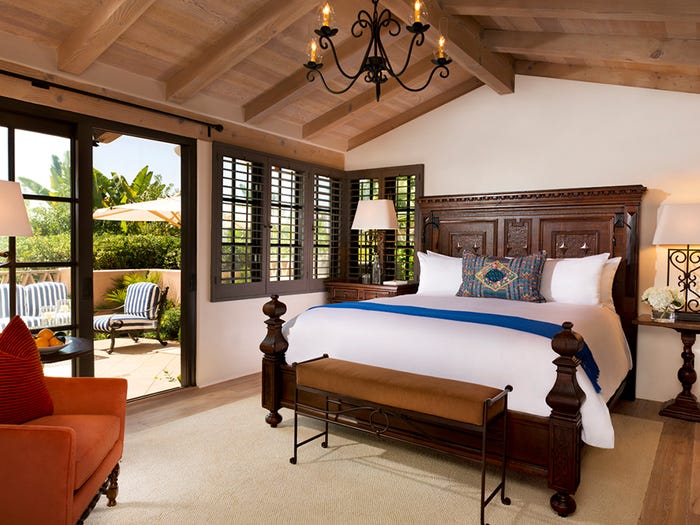 Rancho Valencia is a secluded resort just north of San Diego. US News noted that the property has a "Mediterranean ambiance with hacienda-style architecture." The accommodations have soaking tubs and private balconies or patios. Four Seasons Resort Orlando at Walt Disney World Four Seasons 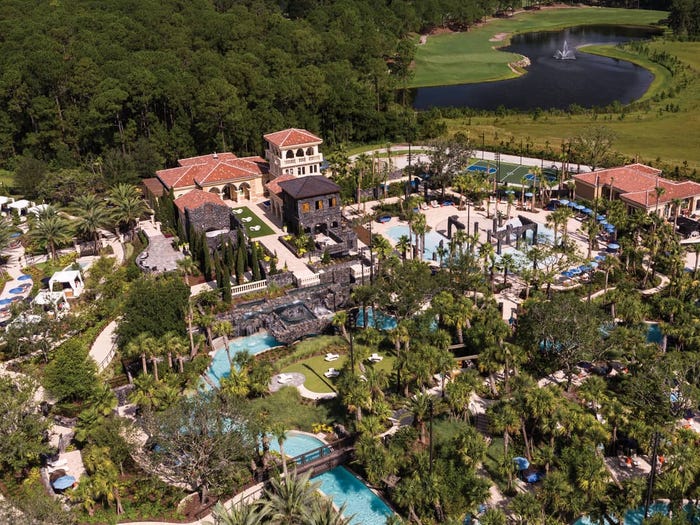 This Four Seasons property is less than five miles from Disney's Magic Kingdom. It has an 18-hole golf course, a massive spa, in-hotel steakhouse, and dramatic pools and lazy rivers. The hotel also offers its own Disney character breakfasts and complimentary shuttles to the theme parks. Acqualina Resort & Residences on the Beach Acqualina Resort & Spa on the Beach 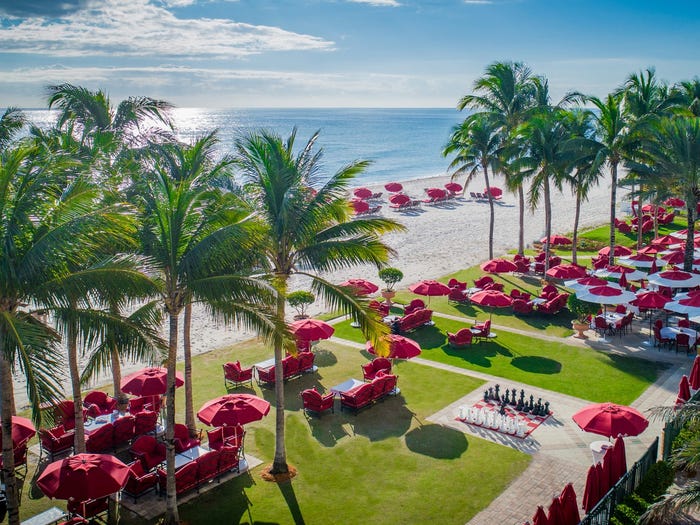 The Miami-area hotel is known for its lavish amenities guests of certain suites can drive their own Rolls-Royce Ghost during their stay. The hotel has 98 guest rooms and suites and three in-house restaurants. The Peninsula Chicago Z Bar 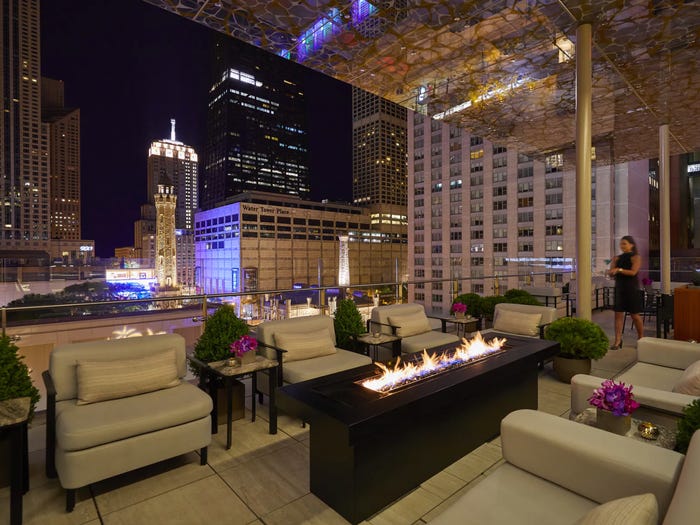 Another luxe hotel on Chicago's Michigan Avenue, the Peninsula has an award-winning spa and afternoon tea service. Recent hotel guests said the hotel's "friendly service staff" made their stay memorable, according to US News. The Peninsula Chicago also houses one of the top hotel bars in the country, according to Forbes travel experts. The Langham Chicago Langham Hotels 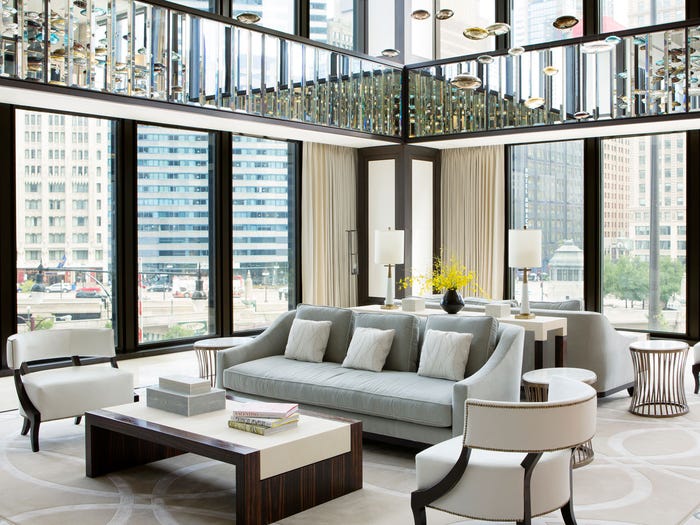 The Langham sits on the Chicago River. It opened in 2013 and occupies 13 floors of a 52-story skyscraper designed by renowned architect Mies van der Rohe. Insider Picks recently described it as "a classic example of luxury, consistently praised for its excellent service and posh appearance." The hotel has an expansive health club, spa, and indoor pool. Four Seasons Resort Lanai Four Seasons 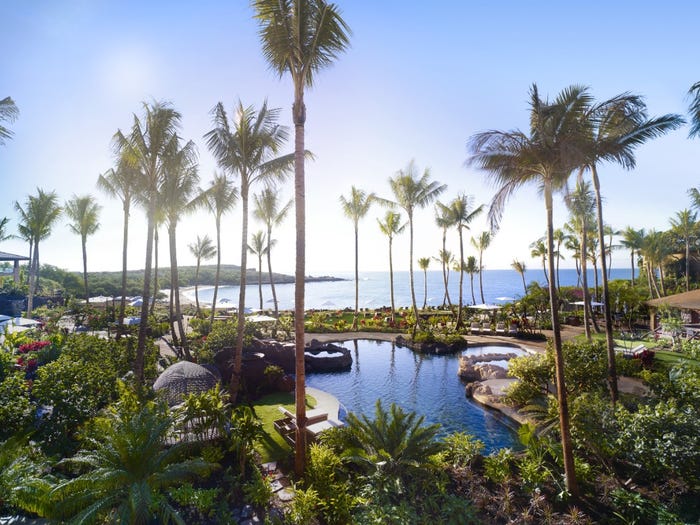 Lanai, a 45-minute ferry from Maui, is an island owned by Oracle billionaire Larry Ellison. The resort features a Nobu sushi outpost and an 18-hole golf course designed by legendary Jack Nicklaus. Activities at the resort range from golfing, snorkeling, deep-sea fishing, hiking, whale watching and more. Each guest room features amenities like a private patio and Nespresso machine.

YouTuber and Nickelodeon star JoJo Siwa comes out as gay

Coming to Disney+ in February 2021