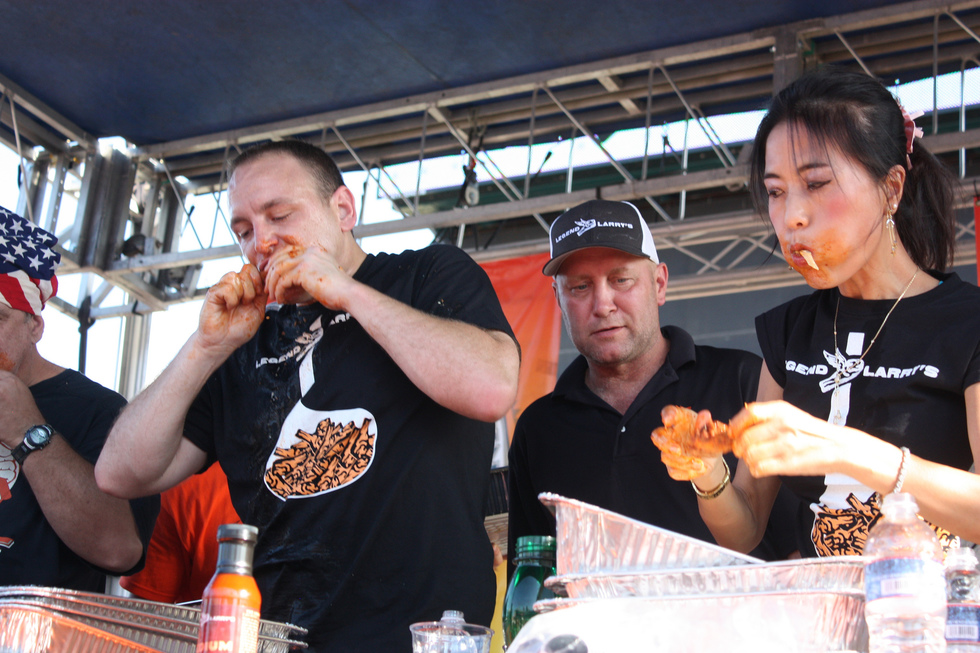 Believe it or not, eating contests are more than seeing who can eat the most the fastest at the county fair. Major League Eating, much in the way Major League Baseball regulates baseball, is an actual organization that oversees professional eating contests nationwide. These contests take place during festivals around the country, celebrating heritage, food and culture. While you might not be on stage eating, stop by these festivals on your next trip to check out some of the country's best eaters. 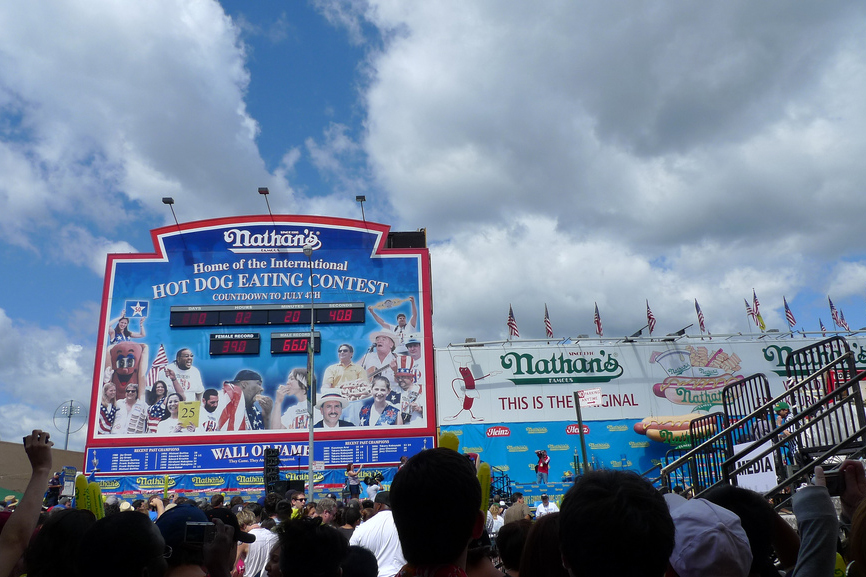 Coney Island, NY Nathan’s Famous Fourth of July Hot Dog Eating Contest, July 4Record: Joey Chestnut with 69 hot dogs in 10 minutes The Nathan's Famous Hot Dog slogan asserts “This is the original,” and it’s true. Nathan’s Famous Fourth of July Hot Dog Eating Contest is the Super Bowl of eating competitions. The hot dog company has been serving up classic style hot dogs since 1916 and hosting the famous contest since 1972. Legend has it the contest began when four immigrants had an eating contest to prove who was more patriotic. The legacy continues as the competition takes place annually on the Fourth of July weekend. Since then, after many attempts by professsonal eaters, Joey Chestnut claimed the world record by eating 68 hot dogs in 2009, only to trump it again four years later with 69 hot dogs. By the way, that’s some 24,000 calories each time. While you might think this display is unnecessarily wasteful, the festival donates $10,000 to the Food Bank for New York City to help feed the hungry. 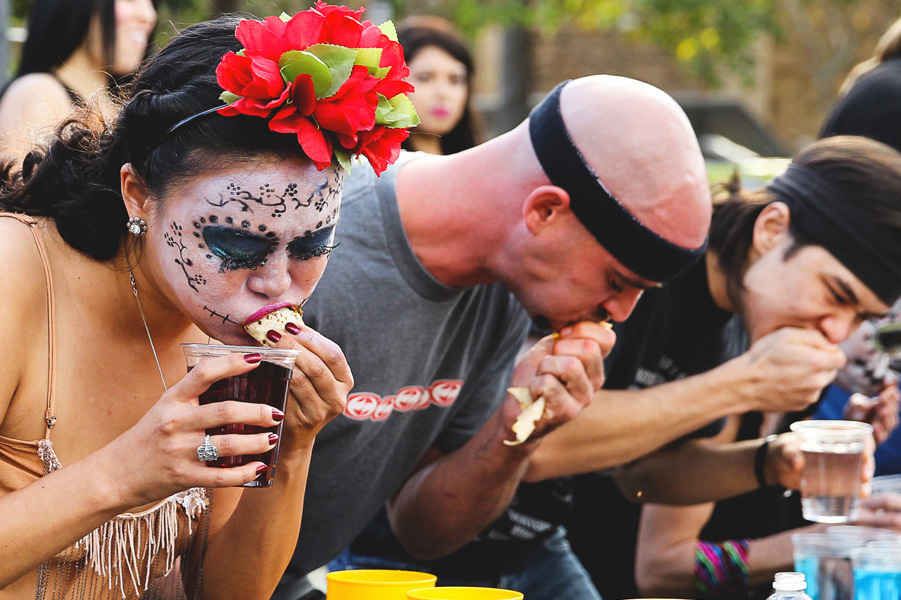 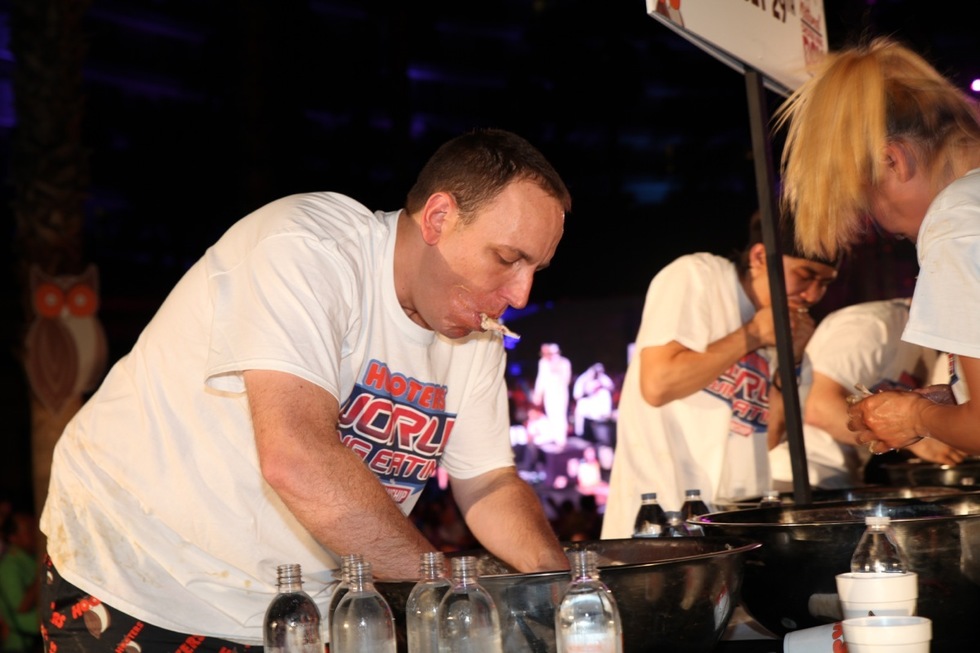 Clearwater, FL Hooters Worldwide Wing Eating Championship, July Record: Joey Chestnut with 184 wings in 10 minutes Which type of wing do you think has more meat? You’d be surprised. The so-called "flat" (the wing with two bones and meat in the middle) actually has a higher meat-to-weight ratio than a drumstick. Professional eaters know these facts. Joey Chestnut (pictured), whose nickname is "Jaws," tears apart the chicken wings, just as he does the dishes at many other contests worldwide. He can eat at a speed of 18.4 wings a minute the winner takes home $8,500. Making money, eating wings, sounds nice, doesn’t it? 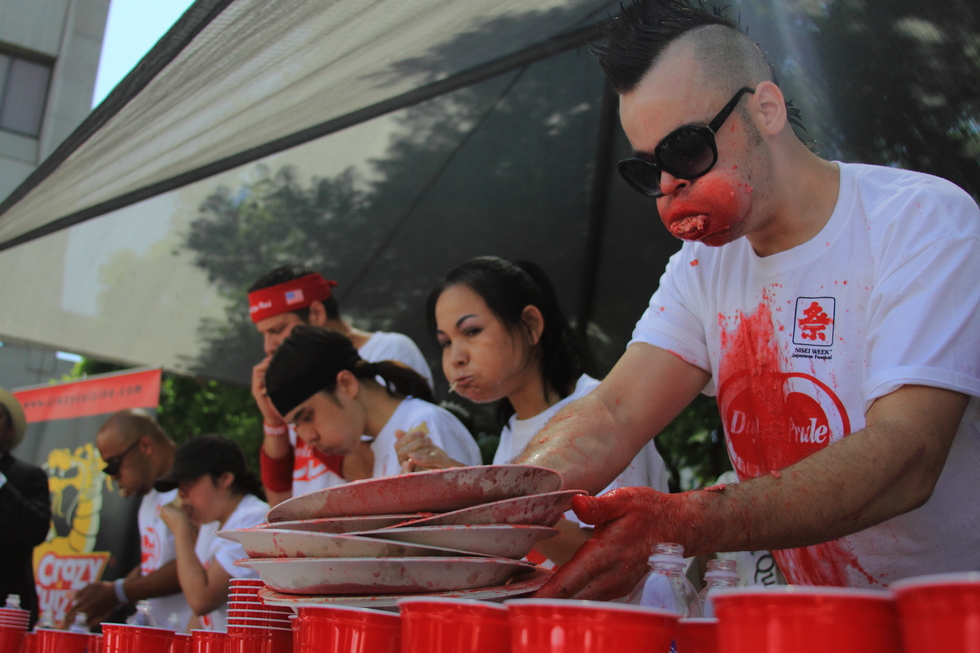 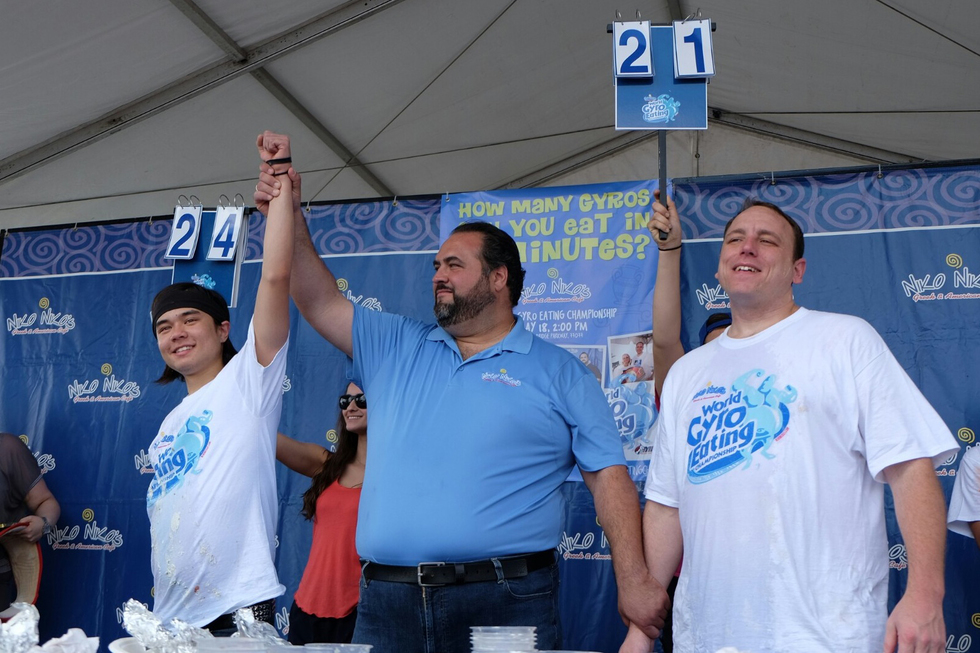 Houston, TX Niko Niko’s World Gyro Eating Championship, May  Record: Matthew Stonie with 24 Niko Niko’s Gyros in 10 minutes Houston’s own Niko Niko’s Greek restaurant has been a local favorite since the day it opened in 1977, and its Niko Niko’s World Gyro Championship takes place during the Houston Annual Greek Fest, a celebration of Greek food, dancing, and culture since 1994. A Greek specialty, the gyro is roasted meat wrapped in pita bread, usually with some tomato, onion and Greek sauce. 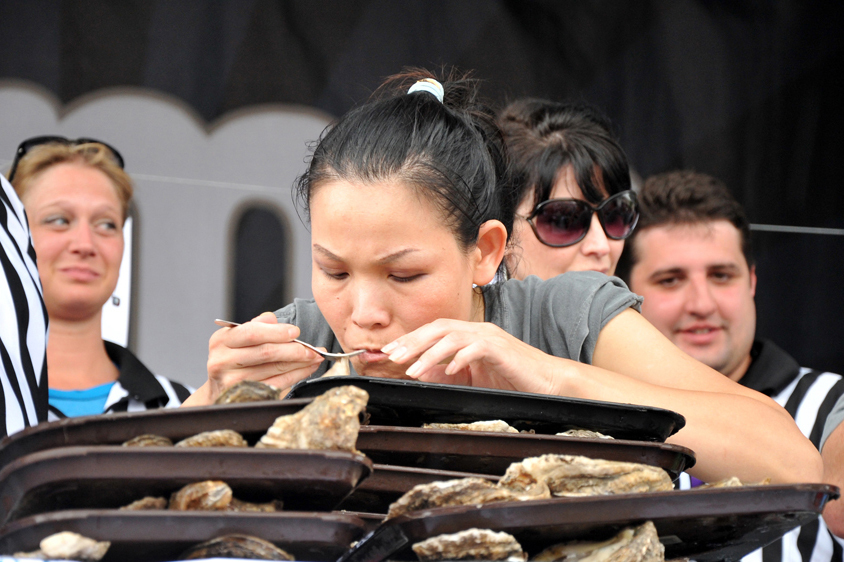 New Orleans, LA The Acme Oyster Eating World Championship at Acme Oyster House, May/ June Record: Sonya Thomas with 46 dozen oysters in ten minutes in 2014. New Orleans celebrates its oyster pride annually at the New Orleans Oyster Festival. Acme Oyster House and other restaurants from around the city come together to show the country the importance of the Louisiana Gulf Oyster and to fundraise to keep the coast thriving. 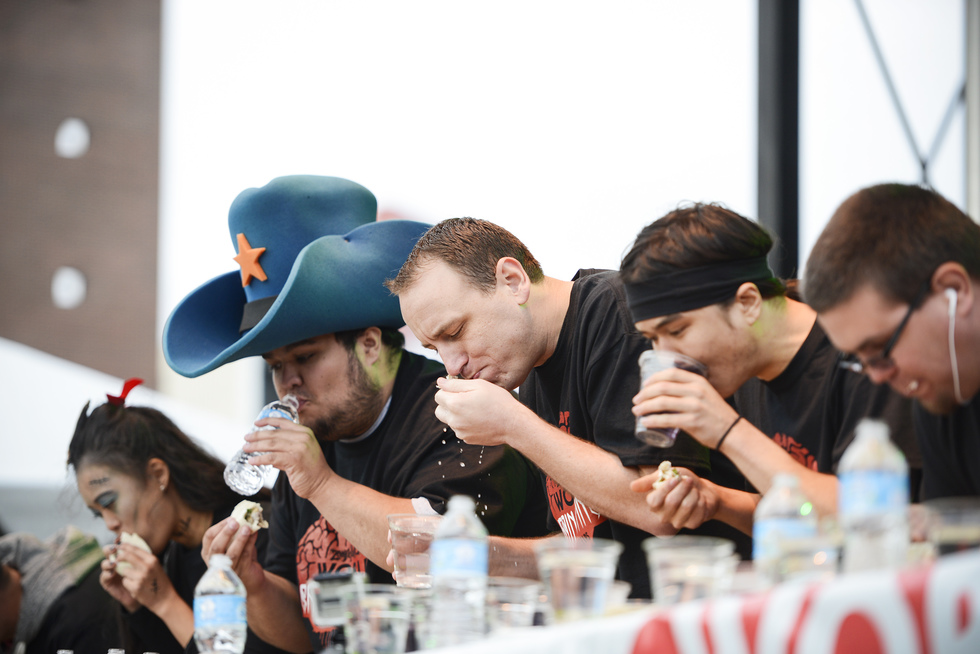 Minneapolis, MN The World Brain Eating Competition at Zombie Pub Crawl Record: Joey Chestnut (pictured, third from right) with 54 brains in eight minutes Even the undead need to eat, right?  The Zombie Pub Crawl is the largest gathering of "zombies" who are actually partygoers in costume in the world and they’re hungry. But don’t worry: The "brains" are actually pork. 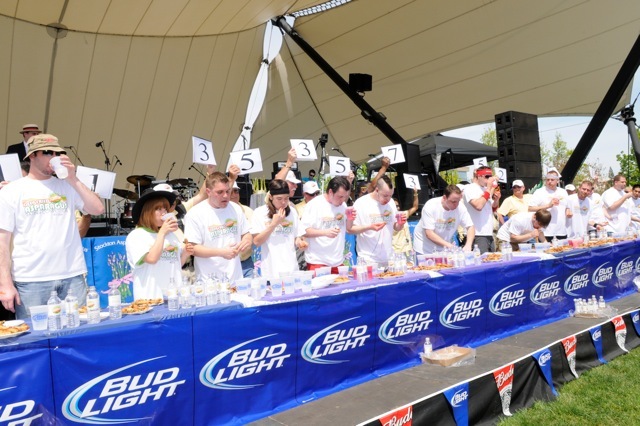 Stockton, CA Deep-Fried Asparagus Eating Competition at the San Joaquin Asparagus Festival, April Record: Joey Chestnut with 12 lbs 8.75 oz in 10 minutes Mom might’ve wanted you to finish your vegetables at dinner, but did she mean for you to eat 13 pounds of it? The San Joaquin Asparagus Festival honors the vegetable with live music, celebrity chefs, and plenty of asparagus. The asparagus surplus comes from the perfect growing conditions of the San Joaquin River Delta wetlands, making the Stockton area one of the country’s biggest producers of the stuff. 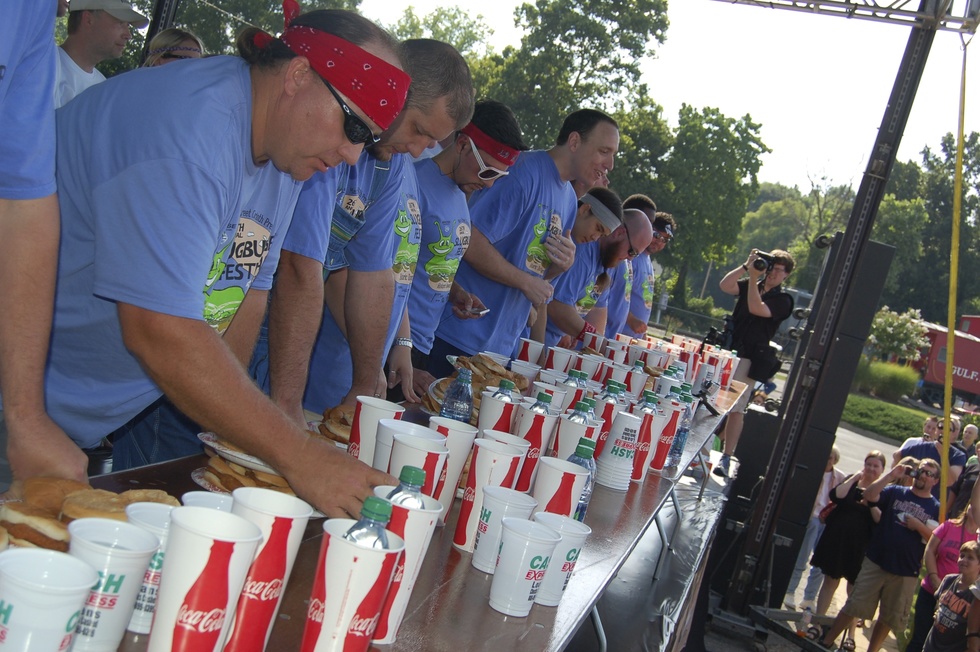 Corinth, MS The World Slugburger Eating Championship presented by Main Street Corinth, July Record: Matthew Stonie with 43 Slugburgers in 10 minutes The race to eat slugburgers is anything but sluggish. Competitors grab burger after burger, each a deep-fried patty made from beef and soy meal, mustard, onions and pickles. The ingredients were tossed together by the slugburger creator John Weeks and were oringinally called "Weeksburgers." Back when Weeks first brought the burgers to Corinth from Chicago in 1917, they sold for just a nickel. In Mississippi at the time, "slug" was slang for nickel and the name "slugburger" stuck. 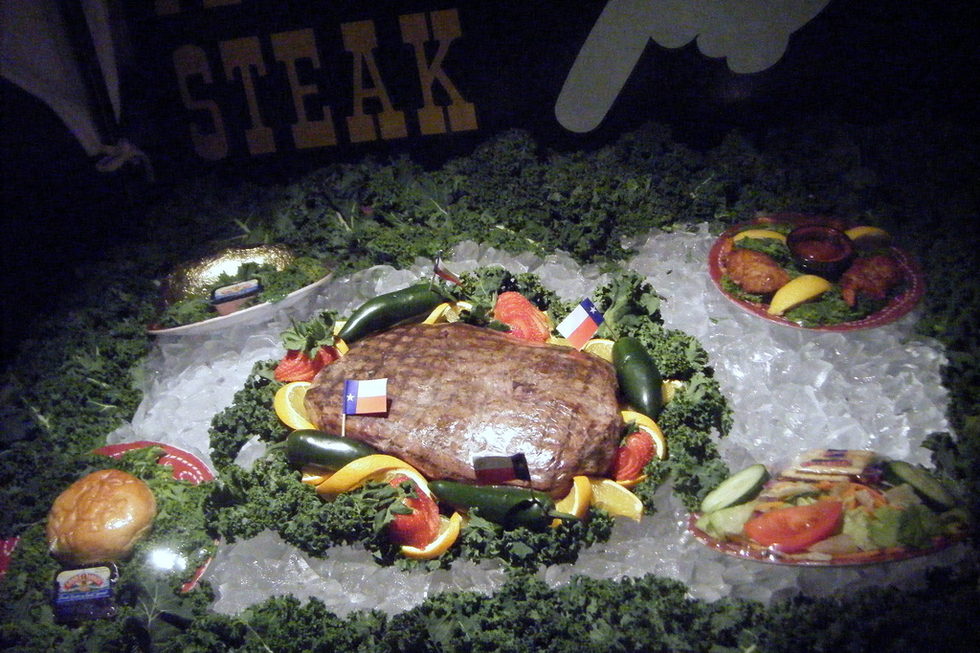 Amarillo, TX Big Texan Steak Ranch 72-ounce Steak Challenge Record: Molly Shuyler with three 72-ounce steak meals in 20 minutes Finally, a challenge any eater can take on even you. The Big Texan Steak Ranch restaurant charges $72 for each steak, but if you eat every bite, the money is refunded and you get the glory. Molly Shuyler, a mother of four, weighs 120 pounds yet she still managed to consume 13.5 pounds of meat, three baked potatoes, three shrimp cocktails, three salads, and three buttered rolls. And she did it all In 20 minutes. Do you have the courage to road trip to Texas for the challenge?

What is the Right Tint for Your Sunglasses?