Most Expensive Cocktails and Drinks

Ranging from a margarita topped with gold leaf to a sidecar that comes with a vehicle, these astronomically priced cocktails are a sensational indulgence for drinkers with big bank accounts and a penchant for hard-to-find cognacs, rums, whiskeys, and liqueurs. Whether served in honor of marriage proposals or personal triumphs, each one of these tipples is a once-in-lifetime way to decadently celebrate. Bottoms up! Wallets empty? Golden Margarita — $250 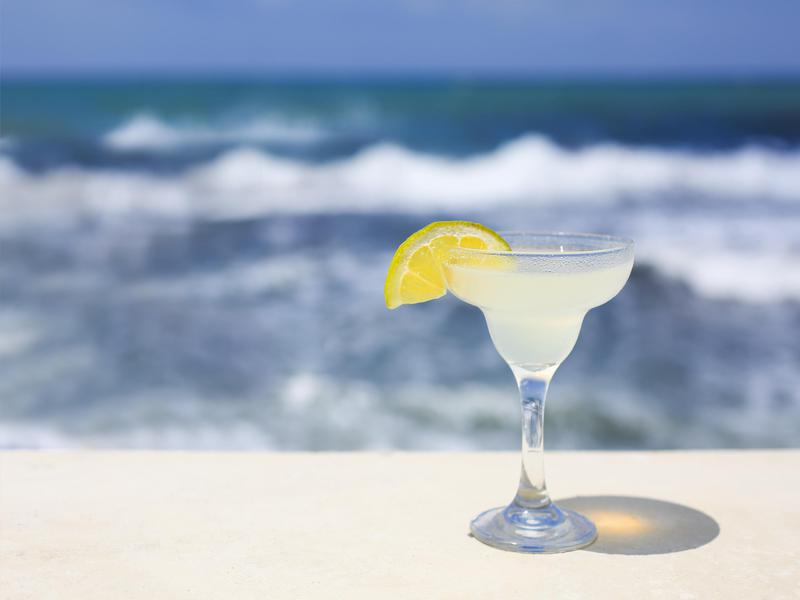 petrenkod/Getty Images The Resort at Pedregal in Cabo San Lucas, Mexico This high-end margarita definitely doesn’t need to be washed down with chips and guac. The Golden Margarita is centered around Clase Azul Ultra, an añejo black tequila that’s been aged five years in Spanish sherry-wood casks. Other ingredients include Hennessy Richard, a unique blend of rare eaux-de-vie aged from 40 years to nearly 200 years old, as well as Cuvée du Centenaire, a mix of XO cognacs. Instead of a salted rim and lime chunk, the ritzy margarita is topped with a lemon rind and 24-karat gold leaf that will sparkle in the sun as it bounces off the Pacific Ocean and Sea of Cortez in the distance. 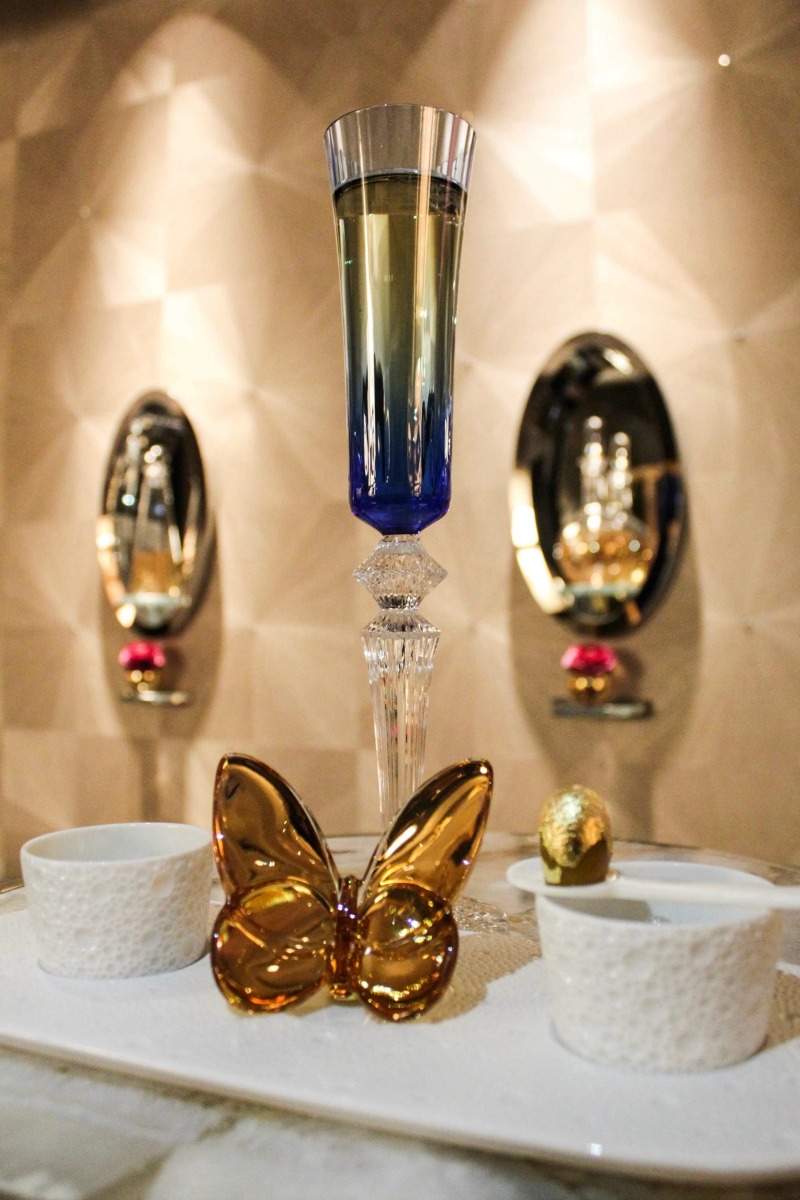 Mr. Coco Mr. Coco’s at the Palms in Las Vegas One of the hottest new lounges in Sin City also features one of the world’s most expensive champagne cocktails: a $300 bubbly delight featuring Dom Perignon P2 2000 Vintage, Hennessy Paradise Imperial and Grand Marnier Quintessence. Francesco Lafranconi, the mixologist who created the effervescent drink, likens Le Papillion’s combination of rare champagne, cognac, liqueur and eaux-de-vie to a beautiful butterfly posing delicately on a wild orchid. Those who order this drink or any others at Mr. Coco’s have plenty of secretive space to spread out and enjoy their drink in peace. The intimate 47-seat piano lounge is tucked away in a nook at the Palms resort’s Fantasy Tower, accessible only by private elevator. Rum Punch — $300 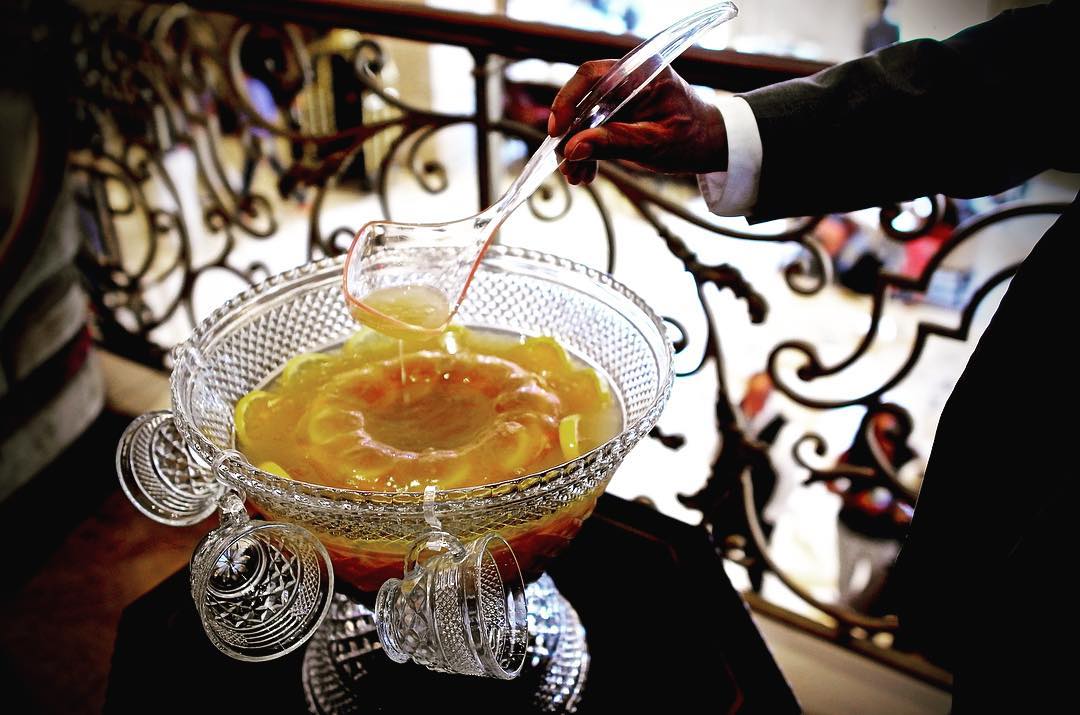 theplazahotel/Instagram The Rose Club at the Plaza Hotel in New York Forget high tea. The Rose Club at the Plaza Hotel, the landmark venue that’s been featured in everything from “The Great Gatsby” to “Home Alone 2: Lost in New York,” is pouring a concoction far more extravagant than a cup of earl grey. Located on the site of the legendary Persian Room, the lounge’s traditional rum punch marries Ron Zacapa and Appleton rums with Fee Brother’s peach and orange bitters, as well as a blend of tropical fruits and juices. There are also brandy and champagne renditions for the same price. While the punches clock in at a few hundred bucks, they’re meant to be shared among six to eight companions, making this one of the most affordable (relatively speaking!) options on this list. Billionaire Margarita — $350 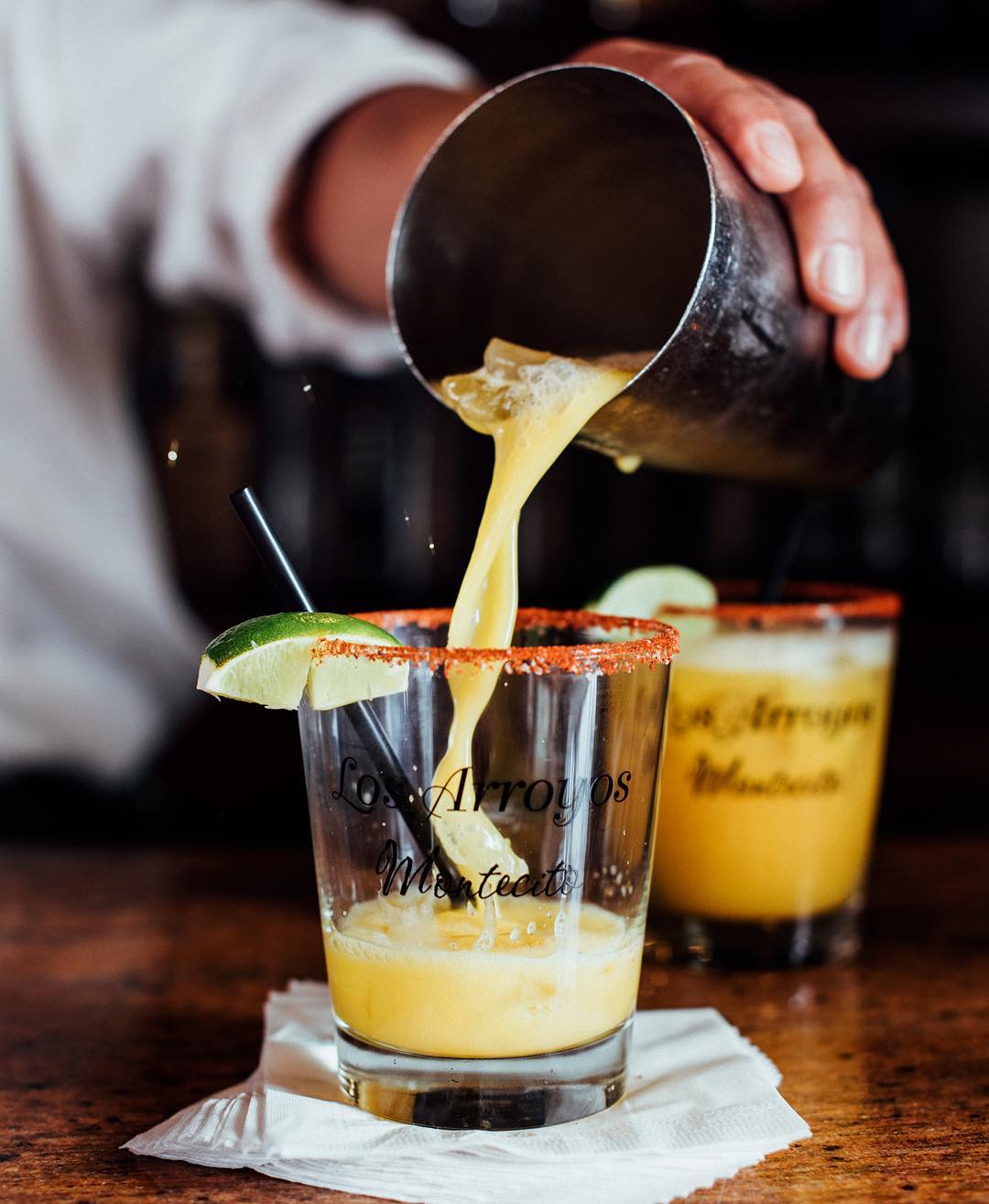 losarroyosrestaurant/Instagram Los Arroyos Mexican Restaurant and Bar in Indiana and California Los Arroyos Mexican Restaurant and Bar has created a marg for the 1 percent. Those who can justify the hefty price tag will be treated to fresh lime juice, Grand Marnier 1880 Cuvée and 16 ounces of Clase Azul Ultra añejo black tequila, which goes for about $2,000 a bottle. If that option will break the bank, there’s also the Millionaire Margarita ($100), made with Gran Patron Piedra, and the Rich Man Margarita ($80), spiked with Don Julio Real, plus several other options under $15. The margaritas are available at Los Arroyos’ Indiana location in Carmel and California locations in Santa Barbara, Montecito and Camarillo. True opulence and a perfectly salted rim isn’t confined to just one destination. The Stanley — $800 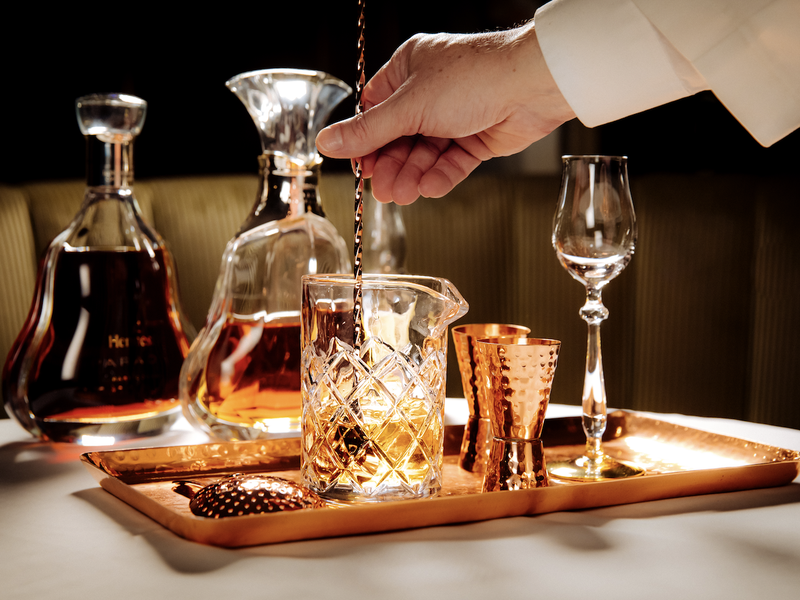 The Beverly Hills Hotel Polo Lounge at The Beverly Hills Hotel in California No, this cocktail isn’t named after Dorothy Zbornak’s follically challenged ex from “The Golden Girls.” The cocktail available at the legendary Polo Lounge is named in honor of Stanley Anderson, the hotel’s owner during prohibition. The drink contains a mix of Hennessy Paradis Imperial and Hennessy Paradis cognacs with 100-year-old Grand Marnier and a Benedictine rinse. The Paradis Imperial is a blend of rare 19th and 20th-century cognacs and goes for over $2,000 a bottle, while the Paradis blend features Hennessy’s oldest eaux-de-vie and is worth around $1,000 a bottle. The drink’s namesake is just as interesting as its highly prized ingredients. On December 15, 1924, police raided the hotel, turning up 300 cases of liquor. Anderson stubbornly claimed they were his personal possessions. He was arrested and fined $500, which would be over $7,000 today. By comparison, his signature cocktail is a bargain. The Ritz Sidecar — $1,800 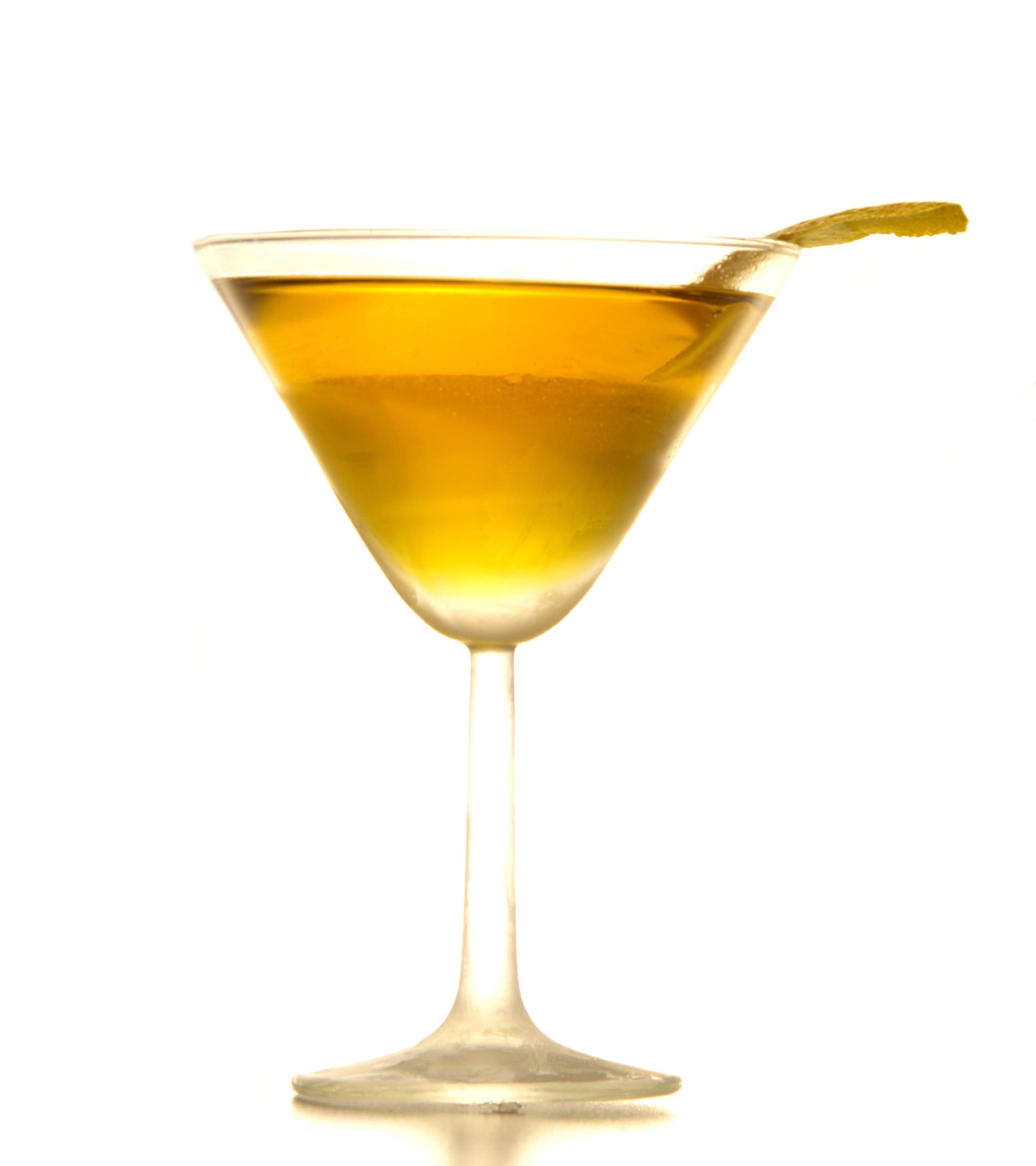 Matthias Friedlein www.augustine-bar.de/Wikimedia Commons Hotel Ritz’s Bar Hemingway in Paris Oh la la! Once Guinness World Records’ most expensive drink, the Ritz Sidecar continues to be a standout despite being eclipsed by more pricey drinks. Invented by former head bartender Colin Field, it’s a faithful sidecar made with Cointreau and lemon juice, plus cognac from the 1800s so coveted that German soldiers attempted to steal it during World War II, according to the hotel. While the bar’s menu has evolved in recent years, the Ritz Sidecar remains a staple for those willing to shell out the big bucks. Don’t even think of trying to make like a German soldier and nab one without paying! Forbidden Love — $2,000 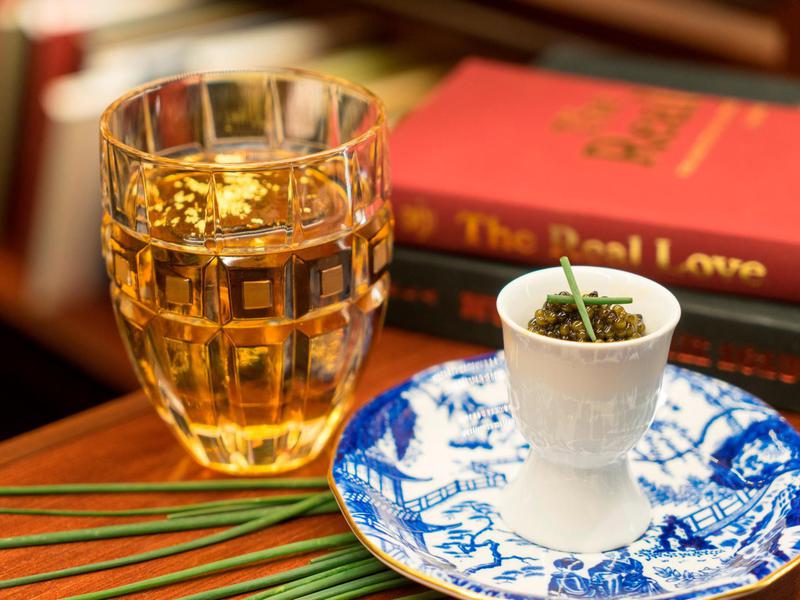 The Venetian Resort Las Vegas/Facebook The Dorsey at The Venetian in Las Vegas Juyoung Kang, the lead bartender, and mixologist at The Dorsey crafted a concoction that takes a 21-year-old Japanese scotch to the next level and will hopefully be a lucky charm at the nearby blackjack tables. The Forbidden Love is made with 1.5 ounces of Suntory Hibiki and spiked with ume plum liqueur, Manzanilla sherry and a couple dashes of Kyoto matcha green-tea tincture. It’s topped with gold flakes and accompanied by a 1-ounce serving of caviar. It’s the most lavish creation ever from Kang, who’s worked across Vegas for nearly a decade in such lauded establishments as Emeril Lagasse's Delmonico Steakhouse and The Laundry Room, the speakeasy inside downtown Vegas’ The Commonwealth. The Impeachment — $5,000 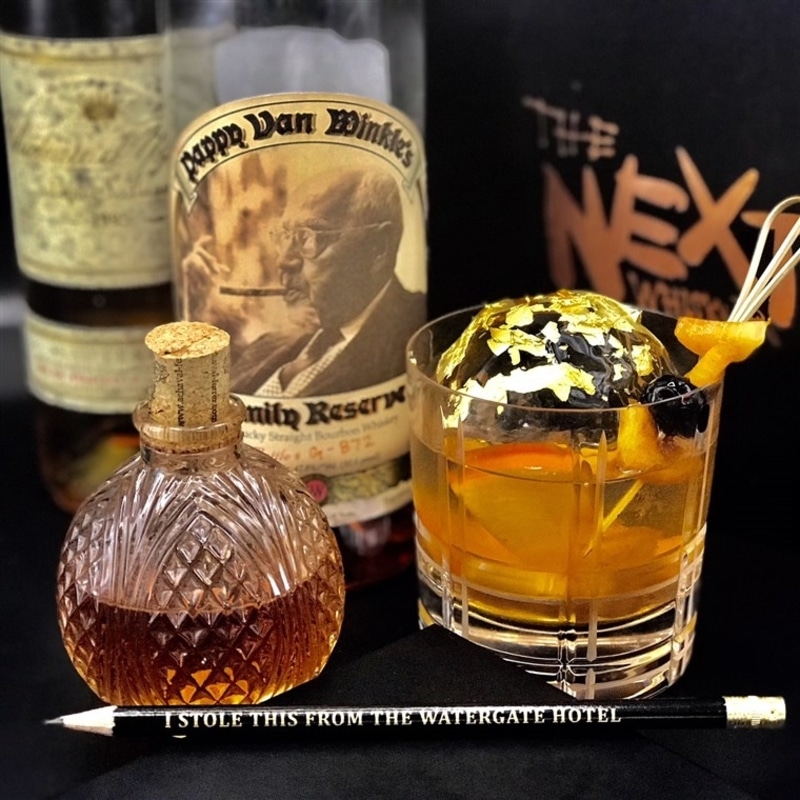 The Watergate Hotel Watergate Hotel in Washington, D.C. Everyone loves a good scandal especially when it’s served over a hand-chiseled ice globe adorned with 14-karat gold leaf. Watergate Hotel’s exorbitant take on old fashioned features 23-year-old Pappy Van Winkle bourbon combined with fresh peaches that have been soaked in 1995 Chateau d’Yquem Sauternes. The Impeachment is available at The Next Whisky Bar or can even be crafted inside Room 214, the exact spot where G. Gordon Liddy and E. Howard Hunt orchestrated the 1972 break-in at the Democratic National Convention headquarters that eventually led to President Richard Nixon’s resignation. This drink definitely isn’t for crooks; it’ll cost $5,000 for two of the cocktails. However, that hefty price tag includes a one-night stay at the property, which reopened in 2016 after a massive $200 million renovation. Sazerac — $6,600 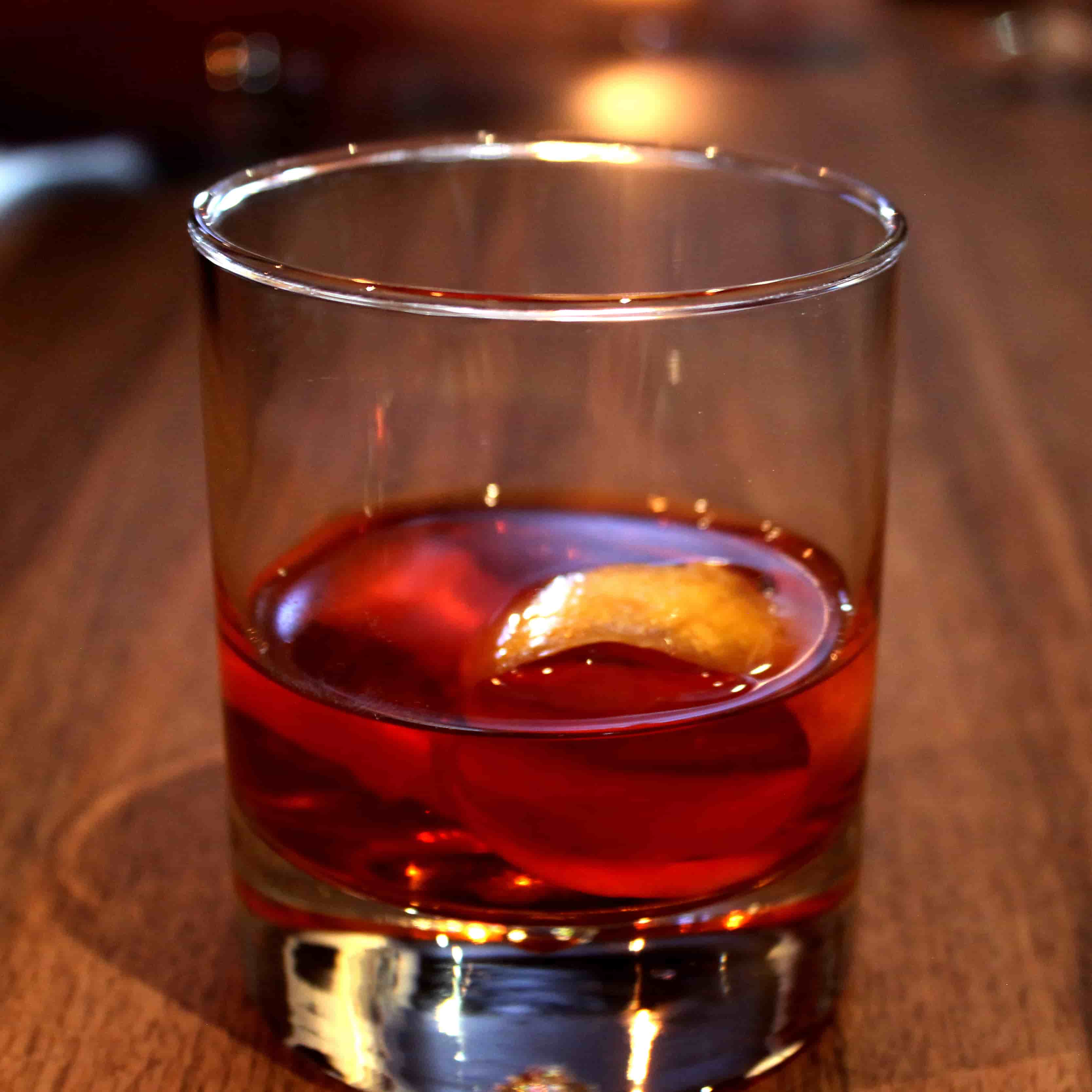 Will Shenton/Wikimedia Commons American Bar inside the Savoy Hotel in London In the world of mixology, the American Bar is an icon. The bar, which opened in 1893 and retains its art deco flourishes from a 1920s-era renovation, is known for its flawless execution of hallmark cocktails. The American Bar’s priciest item is a sazerac made with a litany of venerable treasures: Pernod absinthe from the 1950s, Sazerac de Forge et Fils cognac from 1858 and vintage Peychaud’s bitters. A sip of such history doesn’t come cheap. Yes, the sazerac is quintessentially a New Orleans invention, but the American Bar in London has crafted a masterful version with the best ingredients money can buy. Martini on the Rock — $10,000 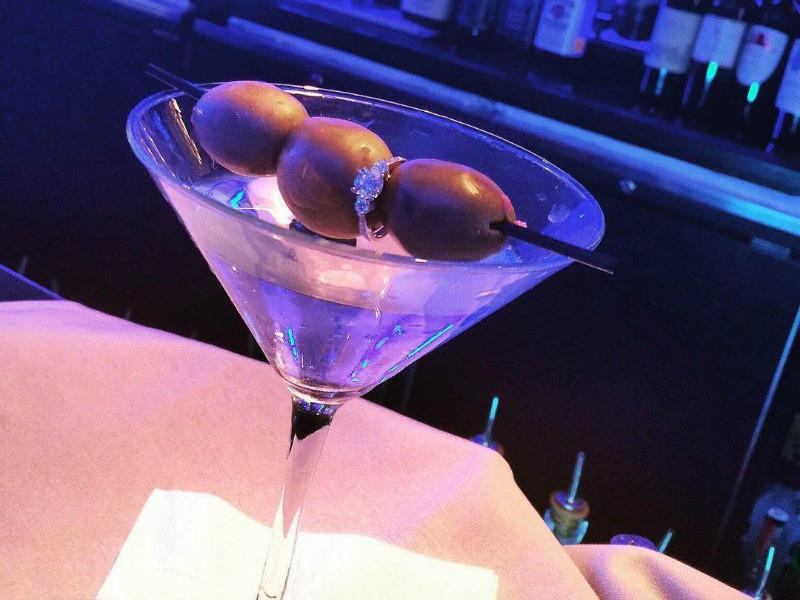 The Algonquin Hotel/Instagram Blue Bar at the Algonquin Hotel in New York City When the famed Algonquin Hotel reopened in 2005, the hotel’s sultry Blue Bar added this ultra-luxurious proposition to its menu. The booze itself isn’t the reason for the sky-high price tag. It’s the garnish. With at least 72 hours notice, Algonquin’s concierge can arrange for budding fiances to work one-on-one with its in-house jeweler to customize an engagement ring that will be carefully placed in the bottom of a martini. The drink is then served in a crystal glass on a silver platter by a white-gloved waiter. Since the $10,000 martini popped up on the Blue Bar’s menu over a decade ago, it’s actually been ordered several times. Monica — $10,000 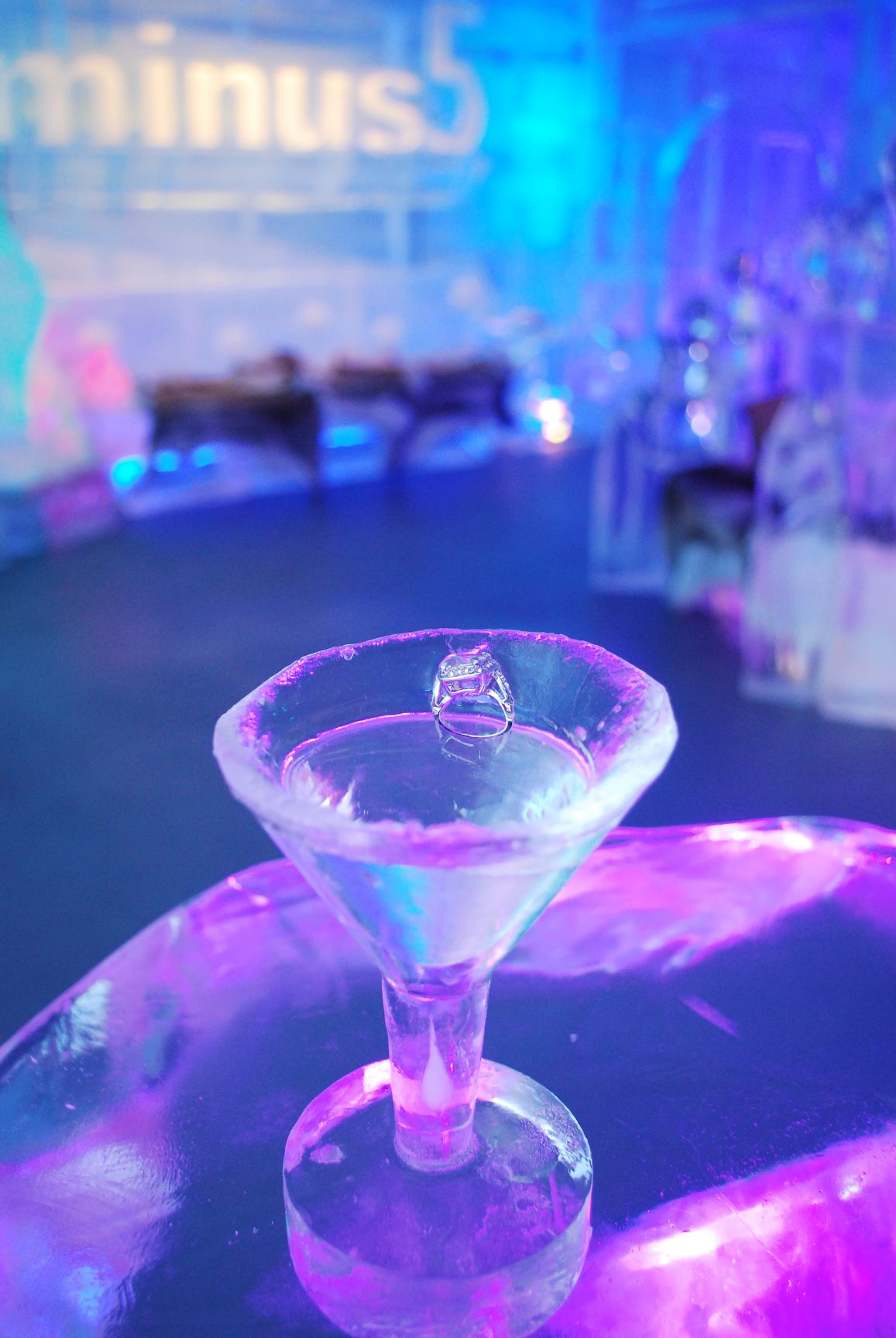 Minus5 Ice Experience Minus5 Ice Experience in Las Vegas, Nevada It makes sense that the stiffest cocktail at the Minus5 Ice Experience, where everything is made of ice, comes with a cool price tag. The Monica martini justifies its expense by using top-shelf Jewel of Russia Ultra Vodka and coming adorned with a custom diamond engagement ring. The ice bar, which outfits visitors with faux fur to keep them warm as they imbibe among the ice sculptures, requests a notice of at least two days for this cocktail to be made. This allows staff to not only facilitate the bling but to embed it in an icy martini glass made entirely out of New Zealand artesian water. The Monica is jokingly named after a Minus5 bartender who was perpetually engaged but hopefully there are no cold feet for those lucky enough to be on the receiving end of this drink. 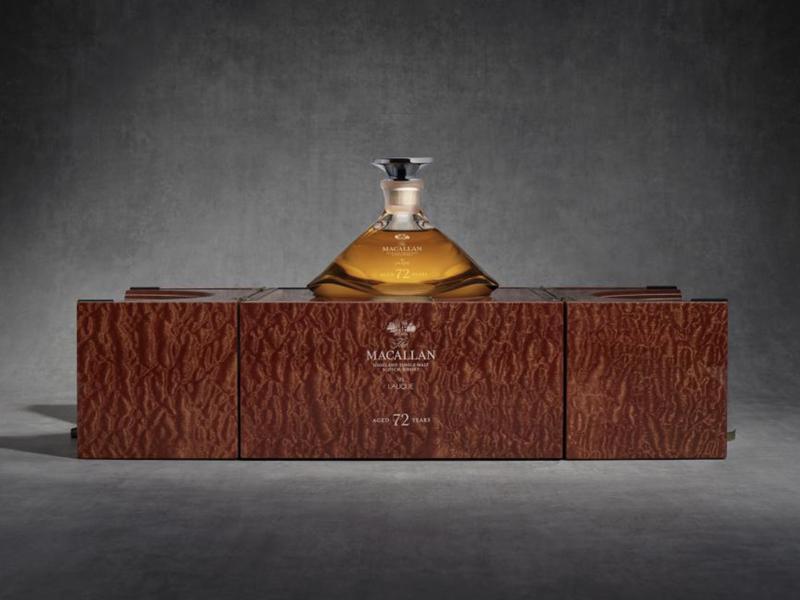 The Macallan £10 bar at the Montage Beverly Hills in California At the exclusive £10 bar, guests sip whiskey-centric cocktails served over ice spheres made from water imported from the Scottish Highlands. The venue is hidden at the Montage Beverly Hills, and it’s only accessible to visitors who book directly through the hotel. While the bar is stocked with various rare whiskeys, the priciest is the oldest scotch ever released by Macallan: an extremely rare 72-year-old bottle that currently goes for $65,000. The tipple one of only 600 bottles produced comes in a bespoke Lalique crystal decanter, whose design is inspired by the Macallan Distillery and Visitor Experience, which opened in Scotland last year. A dram of the good stuff costs $12,000. Winston — $12,970 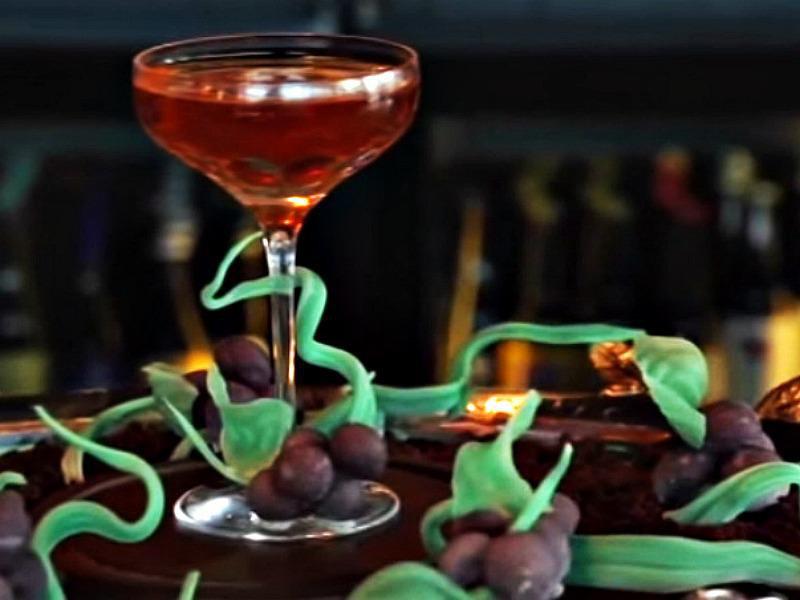 Ramada Crown Casino’s Club 23 in Melbourne, Australia Joel Jeffernan, the executive bartender at Club 23, set the Guinness World Record in 2013 for the world’s most expensive cocktail, and he still holds the title over five years later. Named after Winston Churchill, this exorbitant concoction boasts two shots of Croizet cognac dating back to 1858, as well as Grand Marnier Quintessence and Chartreuse V.E.P. The garnish is equally impressive. It’s sugar-spun with French liqueurs into the shape of a vine that’s punctuated with chocolate and nutmeg souffle balls. “The Wall Street Journal” reported that the first person to order the Winston only took a couple of sips of it before walking away. The drink is still available for high rollers who provide at least a couple of day's notice. Diamonds Are Forever — $16,000 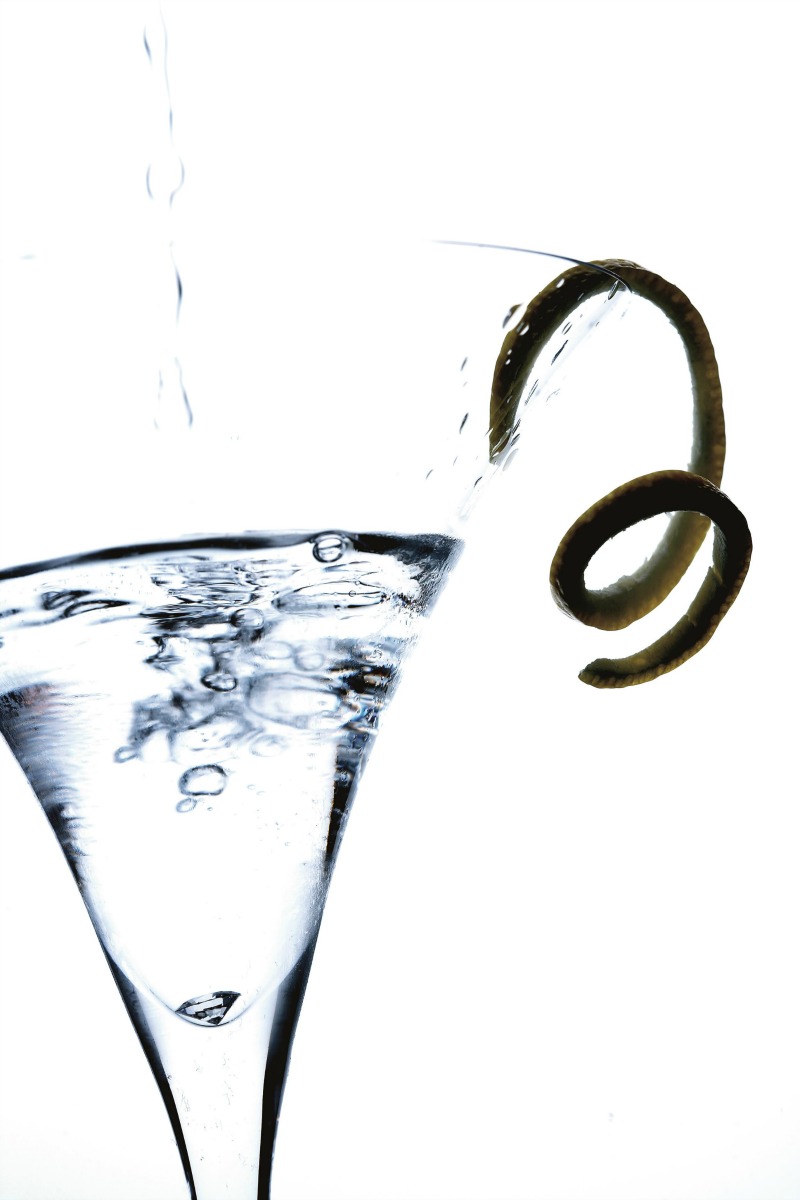 Ritz-Carlton Tokyo Ritz-Carlton, Tokyo Would you like your martini shaken, stirred or…sparkling? The last one is a special option at the Ritz-Carlton located atop the Tokyo Midtown Tower, where a chilled Grey Goose vodka martini is served with a flawless one-carat diamond. The martini is available in the hotel’s sleek lobby bar on the 45th floor, where visitors are treated to exceptional drinks and immaculate views of one of the world’s busiest metropolises. Another testament to this bar’s VIP status? Lounge chairs are covered in silk. Those daring enough to order the ultra-decadent martini will be serenaded with the theme from the James Bond film “Diamonds Are Forever.” But of course. 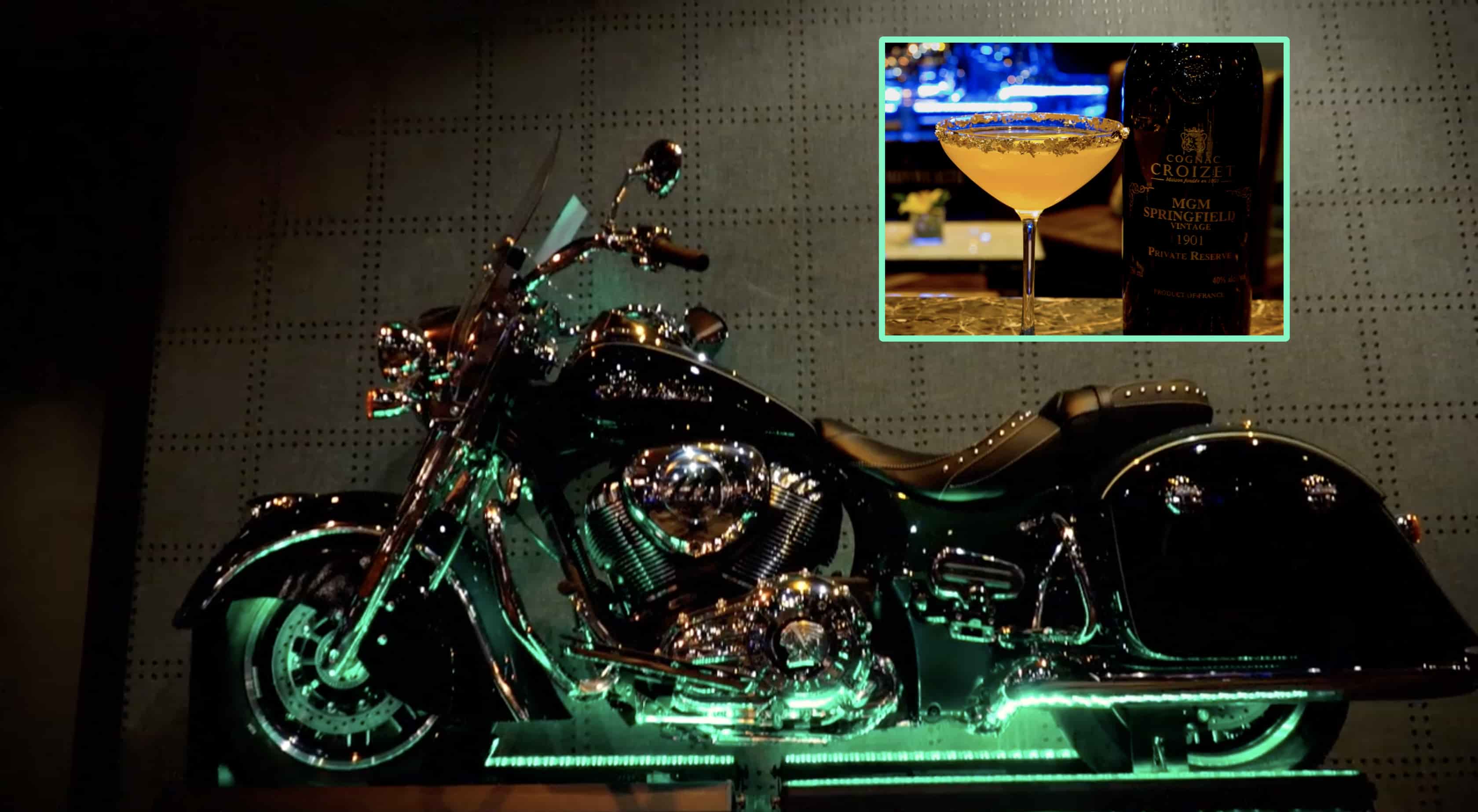 Commonwealth Bar & Lounge/Facebook Commonwealth Bar and Lounge at the new MGM Springfield in Massachusetts Vroom. Vroom. This cocktail will get a drinker’s motor running in more ways than one. That’s because the pricey libation comes with, yes, a motorcycle. The sidecar itself is a mixture of Croizet cognac, Grand Marnier Quintessence and fresh lemon juice with a gold sugar rim. But it’s what it comes served with an Indian Springfield Motorcycle to take home as your own that really makes it worth the splurge. The purchase also includes a bottle of a 1901 vintage Croizet cognac in honor of the founding year of Indian, America’s first motorcycle company. For visitors looking for something with less octane and a price tag with three fewer zeroes the trendy lounge also offers a more simple version of the sidecar made instead with Hennessy XO cognac.
0
Gabriel Klue
1d ago