Cash money, mom! Jennifer Garner’s son, Samuel, paid her for being his mother with the cutest fake check.

“Apparently, birthing and raising someone is valued at $168.42,” Garner, 47, wrote alongside a picture of a check from her 7-year-old son on Friday, January 10. “I guess I should keep my day job. 😂 #iwouldbehismamaforfree #ohwaitialreadyam #👵🏻👦🏼♥️.”

The check, which was made to out to “Mama,” comes from Sam’s piggy bank checking account and was written as a Christmas gift, dated December 25, 2019, to the 13 Going on 30 actress.

In addition to showing Sam’s signature, the check, was written for “being my mama.” 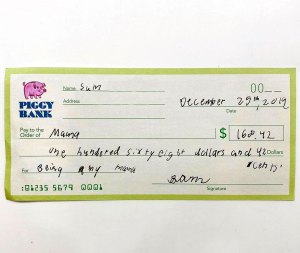 Ahead of the holidays, the Alias alum shut down a troll who questioned her job as an actress, claiming that she doesn’t appear in films anymore despite being dubbed a major movie star.

Garner fired back with humor after the Instagram user left the rude comment on a throwback post that the actress shared of herself from December 2018 when she went to see the American Ballet Theatre’s performance of The Nutcracker.

“What do you call a movie star who makes no movies?” the troll wrote on the video, to which Garner joked, “A mom! 😂😂😂.”

While some people may question the Wonder Park star, who has 2019 acting credits to her name including the Netflix children’s show Llama Llama, her kids have her back.

The Valentine’s Day actress, who shares Samuel and daughters Violet, 14, and Seraphina, 11, with ex-husband Ben Affleck, found a date for life with her son, who volunteered to go with her to events forever.

“I asked my 7-year-old son if he would always be my date to @disneyonice,” the actress captioned an Instagram video in December 2019. “’Always, Mom. Even when I’m a grown-up.’ #spoileralert #tinkwasrescued.”

While the Texas native’s son is ready to be her BFF, her daughter is giving her a run for her money when it comes to going to school.

“I know that I am willing to go to school, but I want something. Maybe hot chocolate? Yes or no,’” one of her girls wrote in a handwritten note that the actress posted via Instagram in December.

Lol, what is this information its funny for me not know for others but I found It very funny. Well, I like your posts and essaypro reviews you should post it like this on a daily basis I visit you on every day.