Heartbreaking losses. Vanessa Bryant released a statement via Instagram on Wednesday, January 29, after her husband, Kobe Bryant, and 13-year-old daughter, Gianna, died in a plane crash on Sunday, January 26.

“My girls and I want to thank the millions of people who’ve shown support and love during this horrific time,” the 37-year-old wrote on Instagram alongside a photo of herself, Kobe and their daughters. “Thank you for all the prayers. We definitely need them. We are completely devastated by the sudden loss of my adoring husband, Kobe the amazing father of our children; and my beautiful, sweet Gianna a loving, thoughtful, and wonderful daughter, and amazing sister to Natalia, Bianka, and Capri.”

She continued, “We are also devastated for the families who lost their loved ones on Sunday, and we share in their grief intimately. There aren’t enough words to describe our pain right now. I take comfort in knowing that Kobe and Gigi both knew that they were so deeply loved. We were so incredibly blessed to have them in our lives. I wish they were here with us forever. They were our beautiful blessings taken from us too soon.”

Vanessa went on to open up about the love she holds for her late husband and her daughter, as well as her desire for privacy at this time.

“I’m not sure what our lives hold beyond today, and it’s impossible to imagine life without them. But we wake up each day, trying to keep pushing because Kobe, and our baby girl, Gigi, are shining on us to light the way,” the mother of four wrote. “Our love for them is endless and that’s to say, immeasurable. I just wish I could hug them, kiss them and bless them. Have them here with us, forever. Thank you for sharing your joy, your grief and your support with us. We ask that you grant us the respect and privacy we will need to navigate this new reality.”

Vanessa concluded with a call to fans to donate to a newly created fund that will provide resources to the families of the victims.

“To honor our Team Mamba family, the Mamba Sports Foundation has set up the MambaOnThree Fund to help support the other families affected by this tragedy. To donate, please go to MambaOnThree.org,” she shared via social media. “To further Kobe and Gianna’s legacy in youth sports, please visit MambaSportsFoundation.org.

Thank you so much for lifting us up in your prayers, and for loving Kobe, Gigi, Natalia, Bianka, Capri and me. #Mamba #Mambacita #GirlsDad #DaddysGirls #Family ❤️.”

Us Weekly confirmed on Sunday that the 41-year-old basketball legend and his daughter died on his private helicopter when a fire broke out onboard. According to TMZ, fire brigade and paramedics arrived at the scene, but nine people were found dead. 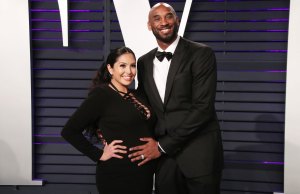 Kobe and Vanessa, who met in 1999, got engaged after six months of dating in 2000. A year later, the twosome wed in April 2001. Two months before his untimely passing, Kobe celebrated the 20th anniversary of the day he met Vanessa.

“On this day 20 years ago I met my best friend, my Queen @vanessabryant I decided to take her on a date to Disneyland tonight to celebrate old school style (pre 4princesses),” he wrote on November 28, 2019, via Instagram. “I love you my mamacita per sempre.”

While the model filed for divorce in December 2011, citing irreconcilable differences, the pair announced their reunion in January 2013.

The twosome shared four daughters: Natalia, 17, Gianna, Bianka, 3, and Capri, 7 months. The year before the couple welcomed their fourth daughter, Kobe revealed that Gianna had the “best” response when fans asked Kobe about adding a boy to their family. 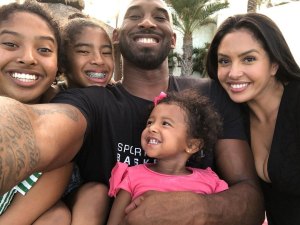 “Fans will come up to me and she’ll be standing next to me,” Kobe said on Jimmy Kimmel Live! in January 2018. “And they’ll be like, ‘Hey, you gotta have a boy. You and Vanessa gotta have a boy to carry on the tradition, the legacy.’ And she is like, ‘Oy, I got this. You don’t need a boy for that, I got this.’ I’m like, ’That’s right, you got this.’”

“I think she wants a boy more than I do,” he said in March 2019. “I love having girls I’m super, super excited about that. She is as well. She wanted a boy so he can be mama’s boy forever that sort of thing. We’ll see if I can deliver.”

Kobe, who was drafted in 1996, played his entire 20-year career for the Los Angeles Lakers. The athlete, who retired after the 2015-16 season, was considered one of the greatest basketball players of all time.