The singer first sought treatment in 2014 after she was diagnosed with lupus. She has since attended various voluntary programs to manage anxiety, panic attacks and depression. Nine months after she completed treatment in January 2018, Us Weekly confirmed she was seeking “opened-ended” mental health treatment.

“It’s been a couple of tough weeks leading up to this,” a source told Us in October 2018. Scroll through to read Gomez’s mental health battle in her own words: 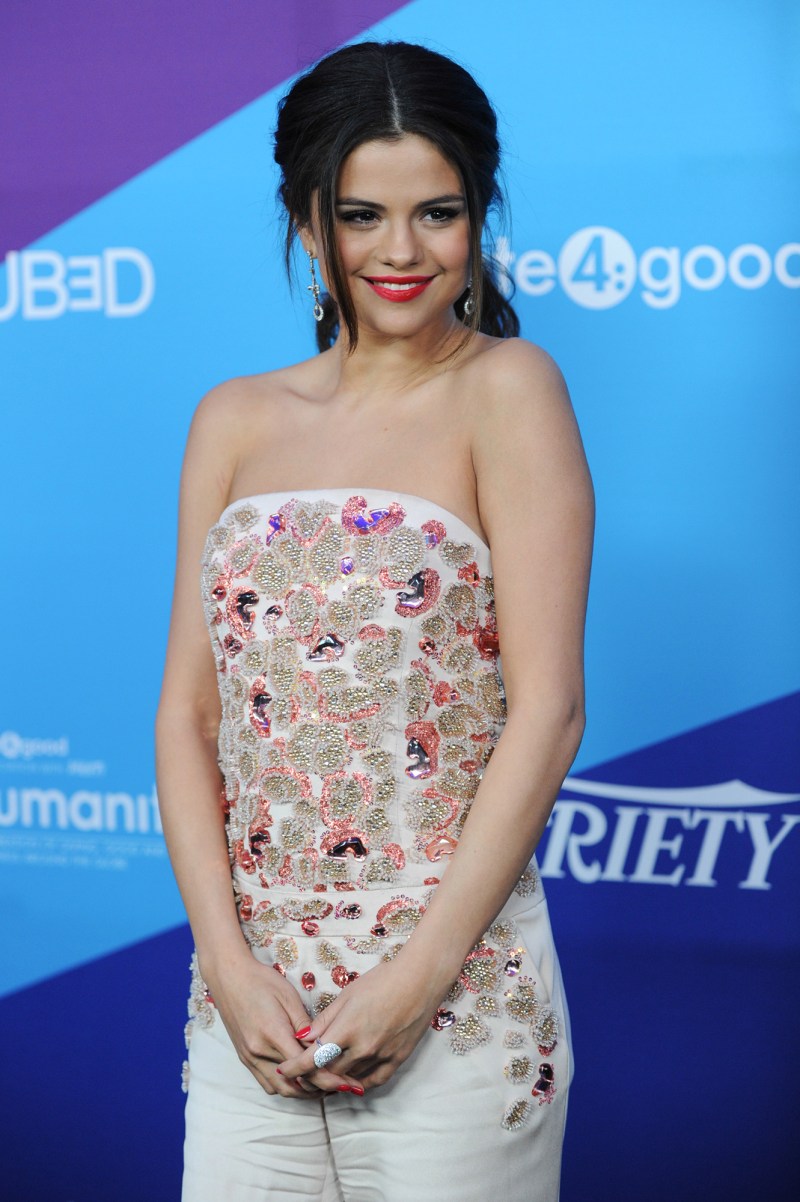 Trying Her Best A rep for Gomez confirmed she sought treatment in February 2014. Shortly after, she thanked fans for their support on Instagram: “I’ve done everything I could to the best of my ability. Thank you for the unconditional love and cyber hugs. You inspire me." Credit: Allen Berezovsky/WireImage/Getty Images 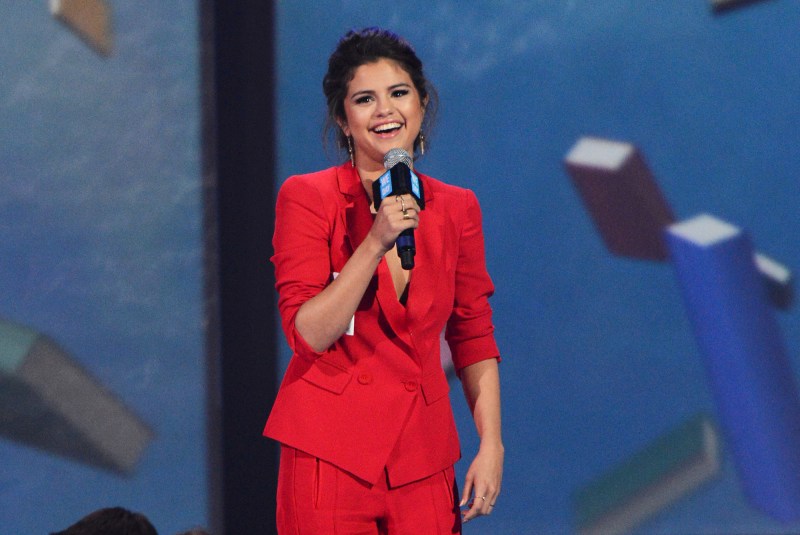 Giving Into Pressure The Disney alum gave an inspiring speech at the We Day conference in March 2014. "I'm surrounded by people who are supposed to guide me, and some of them have, and others haven't. They pressure me. There's so much pressure. You gotta be sexy, you gotta be cute, you gotta be nice. You gotta be all these things,” she told the crowd. "They tell me what to wear, how to look, what I should say, how I should be. Until recently, I had given into that pressure. I lost sight of who I was. I listened to the opinions of people, and I tried to change who I am because I thought that others would accept me for it." Credit: C Flanigan/FilmMagic/Getty Images 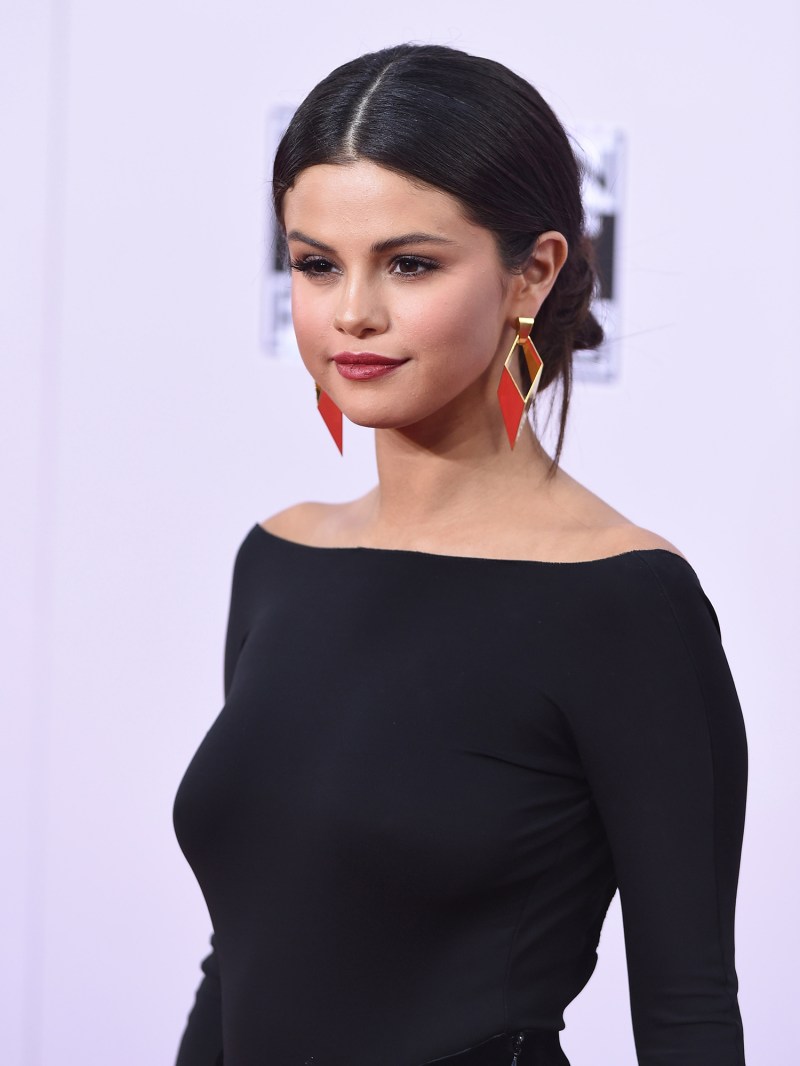 Being a Light After Gomez sent a struggling fan word of encouragement on Instagram, she screenshotted her message and shared it with her millions of followers. "By me following you is not me saying it's ok to think these thoughts. It's not me saying 'hey you said sad things, so I'm going to follow you to make you feel better'. God puts us in situations that are so unexplainably difficult for a reason. There is someone in the world feeling so much, just like you,” she wrote in February 2015. "People every day feel so many emotions they wish they could turn it off. But that's not why we are here. We are here for relationships, for people just like us who feel worthless. Your purpose is to share, help, encourage. Remember that. Please. Before you think of taking your life, think of all the [lives] you could save. I love you. More importantly there is a God that will love more than I ever could." Credit: Axelle/Bauer-Griffin/FilmMagic/Getty Images 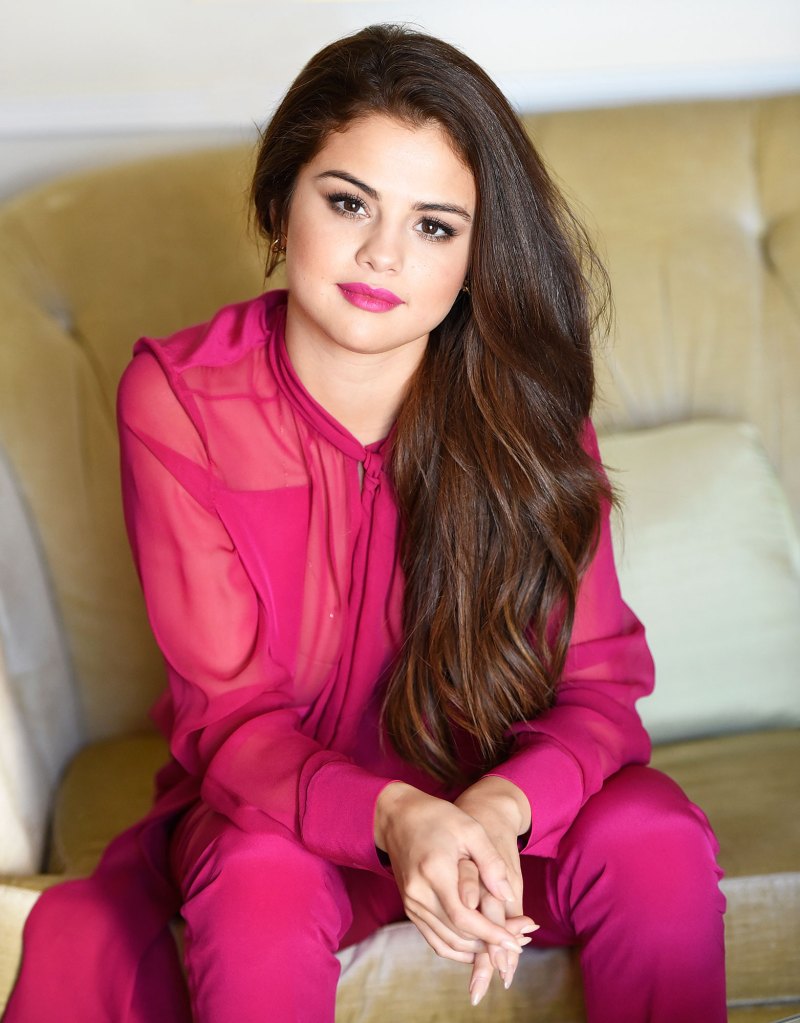 Taking Time In April 2016, the “Same Old Love” songstress explained her decision to go to rehab years earlier. "I got diagnosed with lupus. My mom had a very public miscarriage. So I had to cancel my tour. I needed time to just be OK,” she told GQ. ”It’s really frustrating because I am 100 percent allowed to have that, but I think people just want to have some sort of I understand what you’re asking. But I’m just saying, I don’t think it really matters. My past seems to be way more fascinating for people than my future, which bums me out … Why do you care?" Credit: Angela Weiss/Getty Images 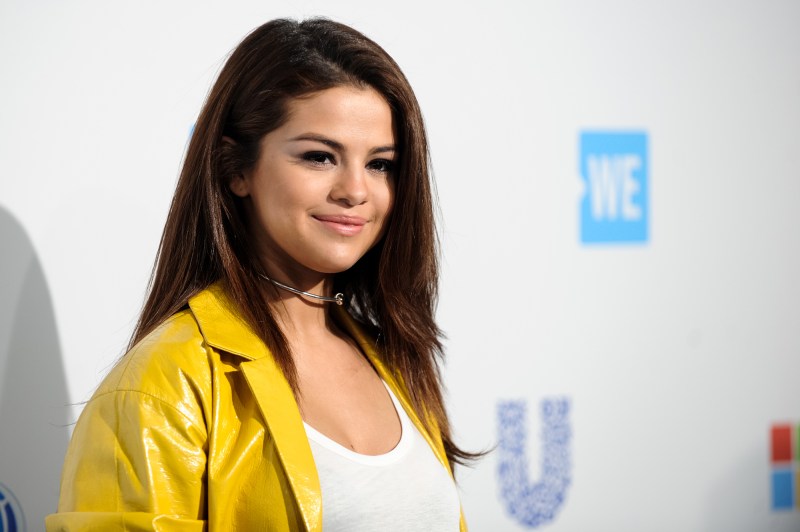 Feeling the Side Effects Gomez revealed she was taking a step back from the public eye in August 2016 to cope with the side effects of Lupus. “As many of you know, around a year ago I revealed that I have Lupus, an illness that can affect people in different ways. I’ve discovered that anxiety, panic attacks and depression can be side effects of Lupus, which can present their own challenges,” she said in a statement to Us Weekly. “I want to be proactive and focus on maintaining my health and happiness and have decided that the best way forward is to take some time off. Thank you to all my fans for your support. You know how special you are to me, but I need to face this head on to ensure I am doing everything possible to be my best. I know I am not alone and by sharing this, I hope others will be encouraged to address their own issues.” Credit: Emma McIntyre/Getty Images 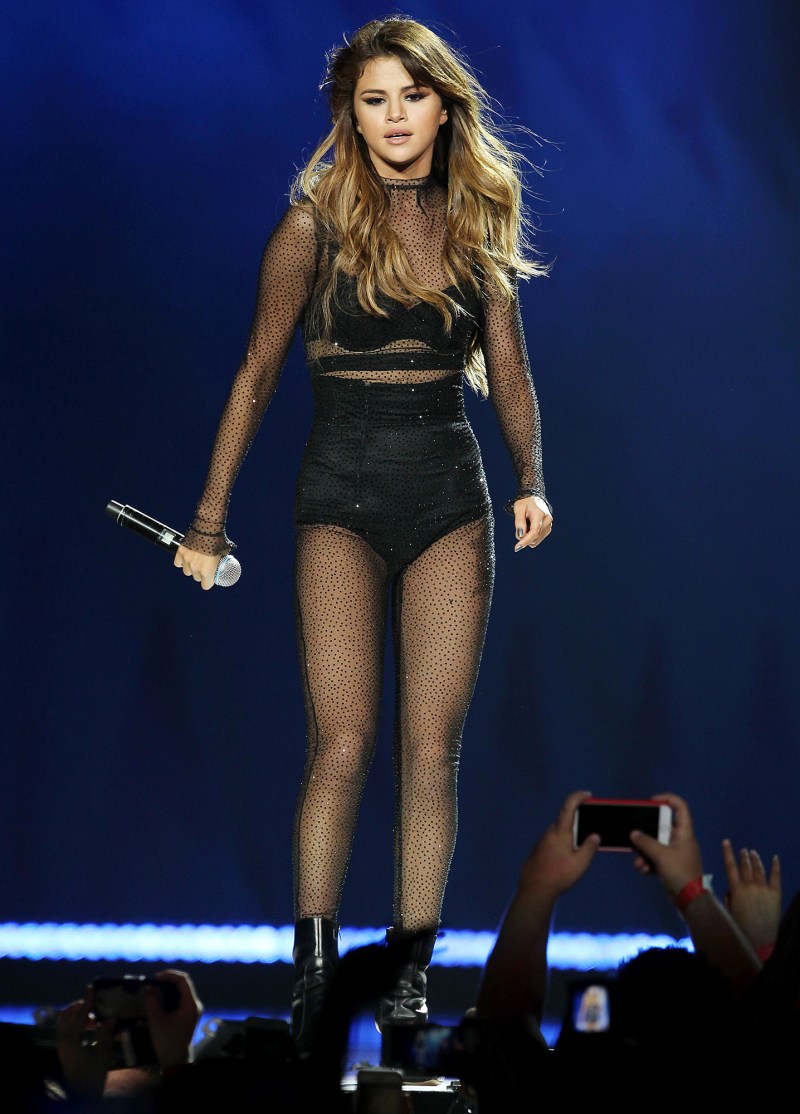 Returning to the Stage The “Hands to Myself” crooner made her first post-rehab appearance at the American Music Awards in November 2016. “In 2014 this stage was actually the first time I was authentically 100 percent honest with all of you,” a teary Gomez told the audience. “I think it’s safe to say most of you know a lot of my life whether I liked it or not. I had to stop because I had everything and I was absolutely broken inside and I kept it all together enough to where I would never let you down, but I kept it too much together to where I let myself down.” “I don’t want to see your bodies on Instagram. I want to see what’s in here,” Gomez continued while pointing to her heart. “I’m so grateful to be able to share what I love with people that I love. You guys are so damn loyal but if you are broken you do not have to stay broken.” Credit: Barcroft Images/Barcroft Media/Getty Images 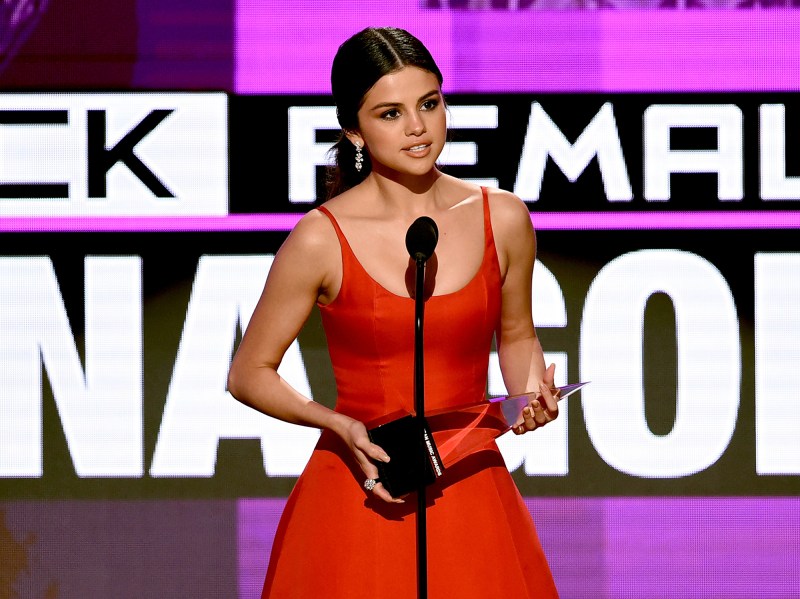 Staying Thankful Gomez shared an emotional message with fans on Thanksgiving Day in 2016, admitting it was her “hardest” but “most rewarding” year yet. “I’ve finally fought the fight of not 'being enough.' I have only wanted to reflect the love you guys have given me for years and show how important it is to take care of YOU,” she wrote. “By grace through faith. Kindness always wins. I love you guys. God bless.” Credit: Kevin Winter/Getty Images 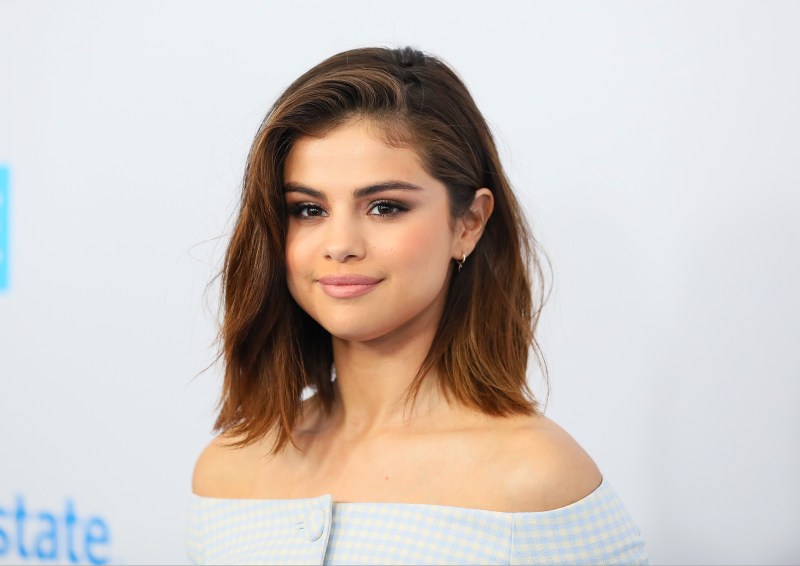 Still Relatable While promoting season 1 of 13 Reasons Why, Gomez, who served as an executive producer on the series, revealed she related to the story. “I went away for 90 days and I actually met tons of kids in this place [and] we are talking about a lot of the issues that these characters are experiencing, [so] I would say yes,” Gomez said during a panel in February 2017. “I had to deal with it on a different scale. Whether it was kids or just growing up in the biggest high school in the world which was the Disney Channel, it was also adults that had the audacity to kind of tell me how I should live my life. It was very confusing for me. … I had no idea who I was gonna be, what I'm still going to become. It definitely hit home.” She added: “I think this is what they need to see. We are not gonna post things, like, ‘Hey be empowered,' because that's not what they wanna see. Kids don't care. They have to see something that's gonna shake something. I want them to understand it. I would do anything to have a good influence on this generation. It's hard, but I definitely relate to everything going on.” Credit: JB Lacroix/WireImage/Getty Images 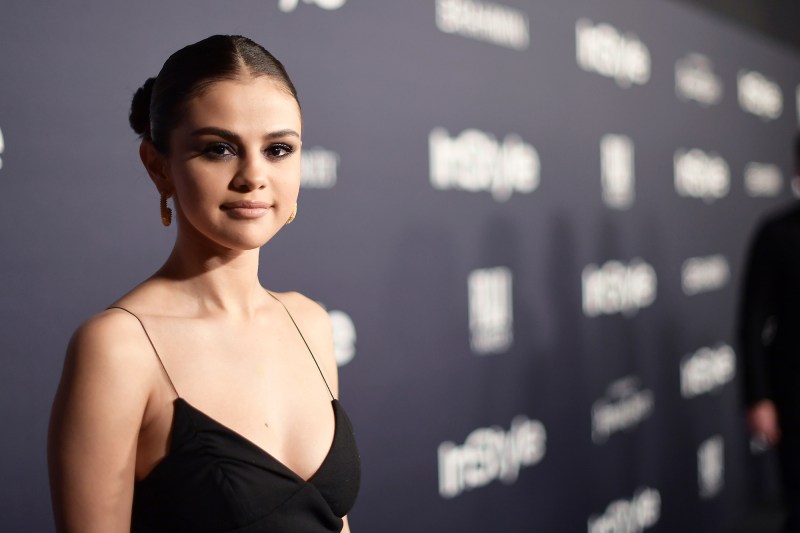 Life on the Road Gomez admitted to Vogue in March 2017 that she feels “really lonely” on tour. “My self-esteem was shot. I was depressed, anxious. I started to have panic attacks right before getting on stage, or right after leaving the stage. Basically I felt I wasn’t good enough, wasn’t capable,” she revealed. “I felt I wasn’t giving my fans anything, and they could see it which, I think, was a complete distortion. I was so used to performing for kids.” “At concerts, I used to make the entire crowd raise up their pinkies and make a pinky promise never to allow anybody to make them feel that they weren’t good enough. Suddenly I have kids smoking and drinking at my shows, people in their 20s, 30s, and I’m looking into their eyes, and I don’t know what to say. I couldn’t say, ‘Everybody, let’s pinky-promise that you’re beautiful!’” Gomez continued. “It doesn’t work that way, and I know it because I’m dealing with the same shit they’re dealing with. What I wanted to say is that life is so stressful, and I get the desire to just escape it. But I wasn’t figuring my own stuff out, so I felt I had no wisdom to share. And so maybe I thought everybody out there was thinking, This is a waste of time.” Credit: Matt Winkelmeyer/Getty Images 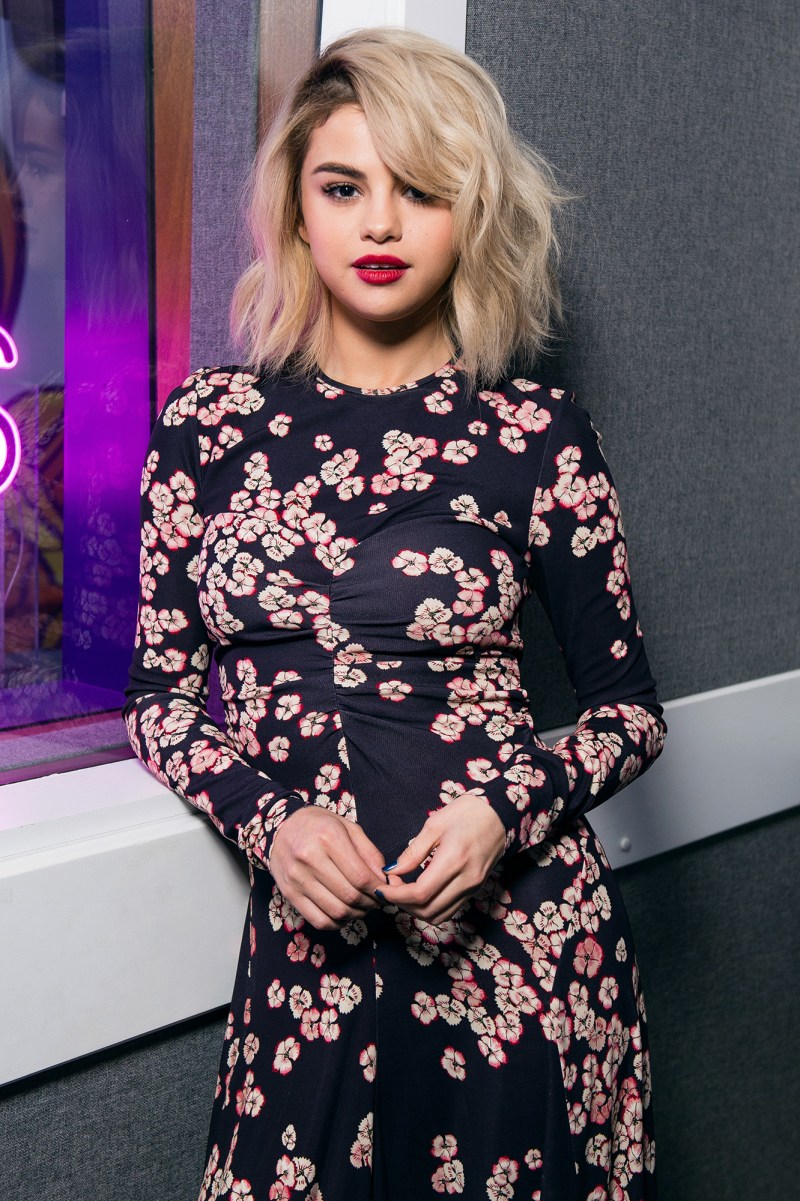 Mental Health Exercises When Gomez moderated a movie screening for Heaven Knows What in August 2017, she revealed she “really likes the mental aspect” of the film. “The beginning of the movie stuck with me… that’s not really a secret, but, I for sure have talked about that and have done a lot of those exercises.” Credit: Jeff Spicer/Getty Images 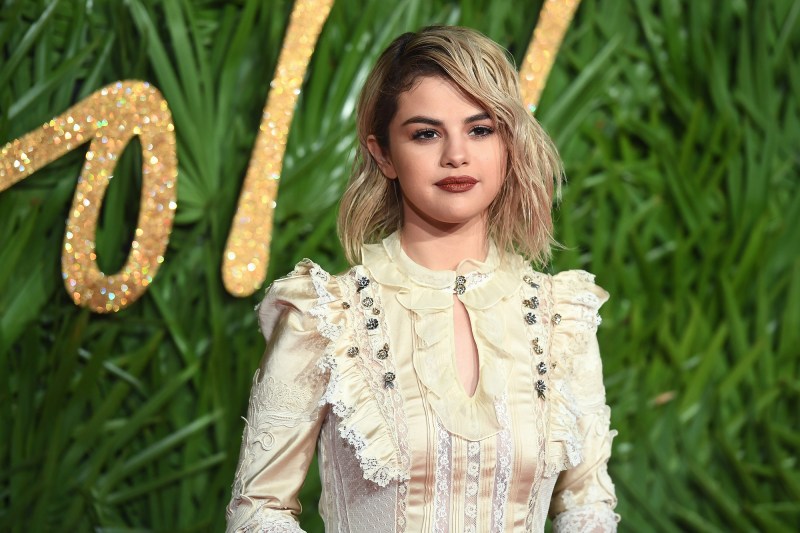 An Ongoing Struggle “Anyone who knows me knows I will always start with my health and my well-being,” she began in her March 2018 Harper’s Bazaar cover story. “I’ve had a lot of issues with depression and anxiety, and I’ve been very vocal about it, but it’s not something I feel I’ll ever overcome. There won’t be a day when I’m like, ‘Here I am in a pretty dress I won!’ I think it’s a battle I’m gonna have to face for the rest of my life, and I’m OK with that because I know that I’m choosing myself over anything else.” Credit: Samir Hussein /WireImage/Getty Images 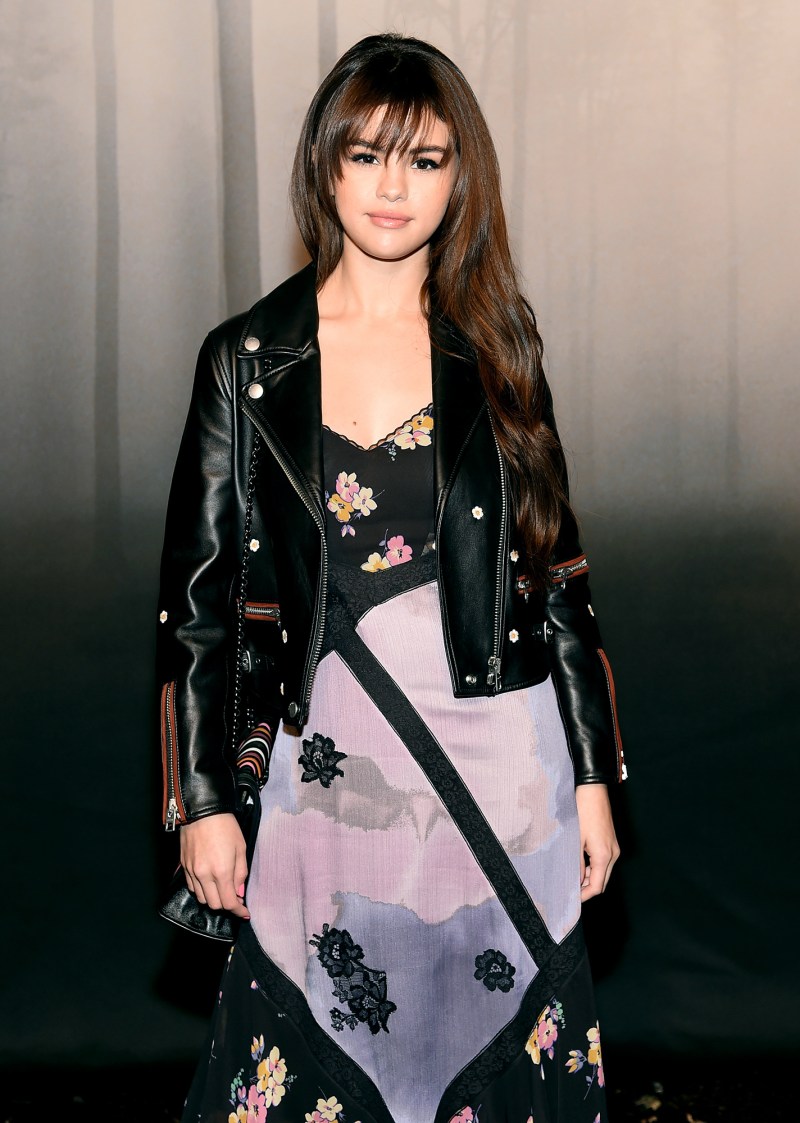 Taking Care of Herself “The beauty myth- an obsession with physical perfection that traps modern woman in an endless cycle of hopelessness, self-consciousness, and self-hatred as she tries to fulfill society’s impossible definition of flawless beauty,” Gomez wrote on Instagram in March 2018. “I chose to take care of myself because I want to, not to prove anything to anyone. Wind in her sails.” Credit: Jamie McCarthy/Getty Images 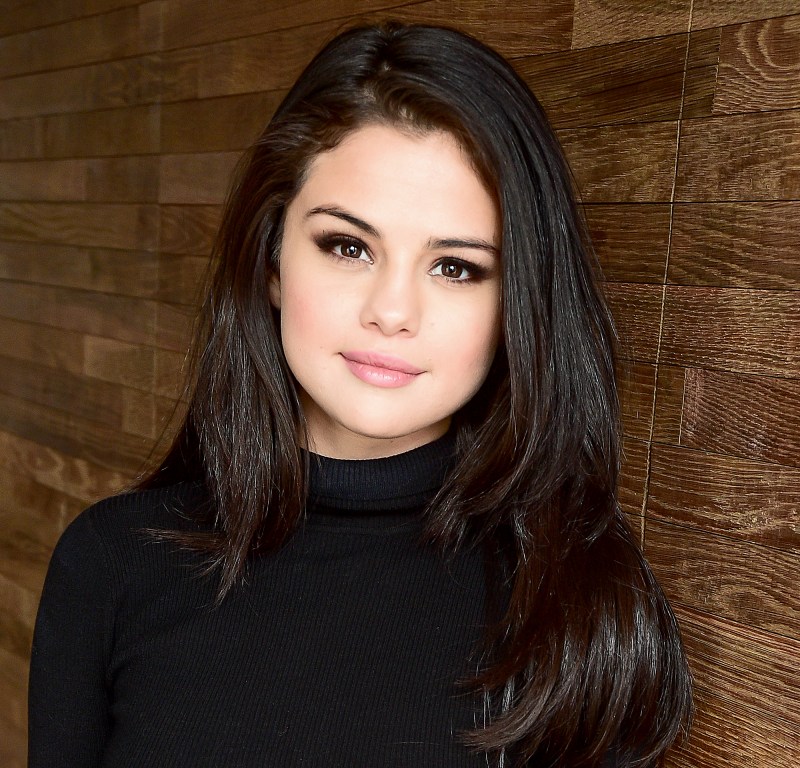 Proud of Her Progress After Gomez completed another stint in treatment in December 2018, she broke her silence via Instagram the following January. “It’s been a while since you have heard from me, but I wanted to wish everyone a happy new year and to thank you for your love and support,” she wrote. “Last year was definitely a year of self-reflection, challenges and growth. It’s always those challenges that show you who you are and what you are capable of overcoming. Trust me, it’s not easy, but I am proud of the person I am becoming and look forward to the year ahead. Love you all.” Credit: George Pimentel/Getty Images for Sundance Film Festival 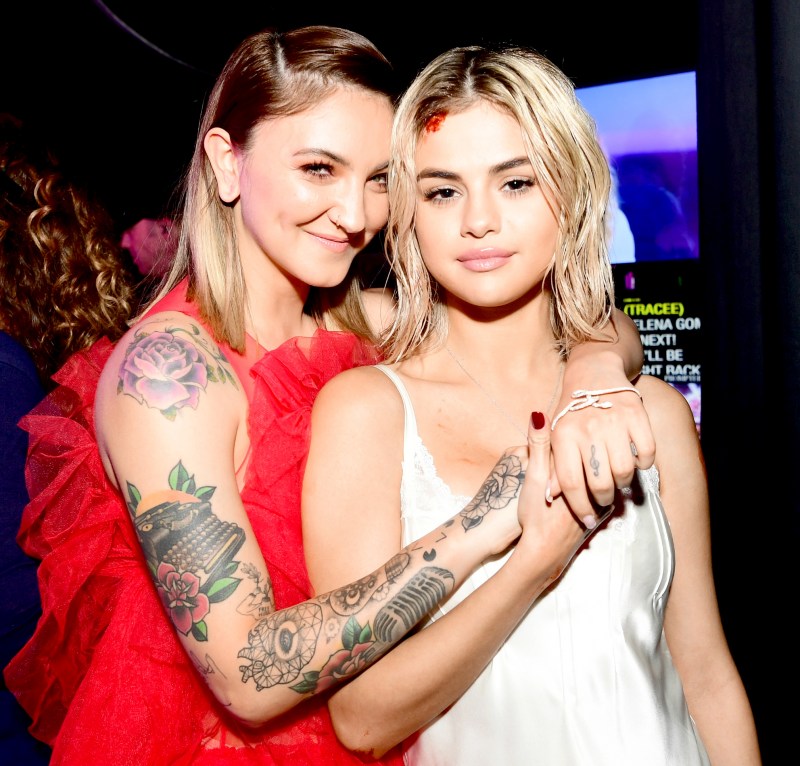 Singing Through It Gomez sang about her mental health battle in a song with Julia Michaels titled “Anxiety,” released in January 2019. “But all my friends they don't know, what it's like, what it's like / They don't understand why, I can't sleep through the night,” she sings. “And I thought that I could take something to fix it / Damn I wish it, I wish it was that simple, ah, ah.” Credit: Emma McIntyre/AMA2017/Getty Images for dcp 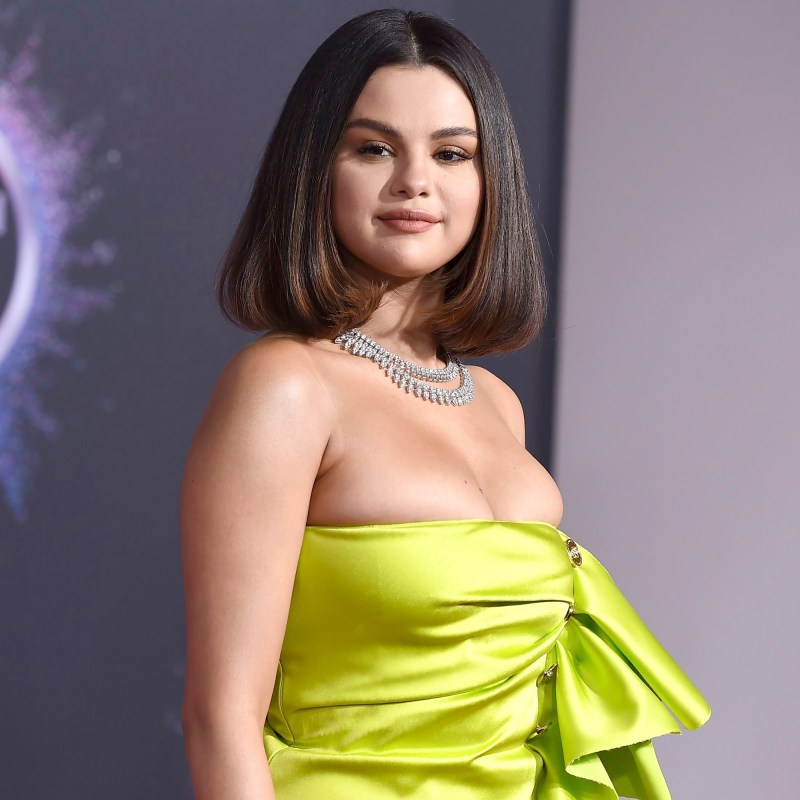 Coming to Terms In April 2020, Gomez revealed she was bipolar during an appearance on Miley Cyrus’ Instagram Live series, Bright Minded: Live With Miley. “Recently I went to one of the best mental hospitals in the world … And I discussed that after years of going through a lot of different things I realized that I was bipolar,” she explained. “When I have more information, it actually helps me, it doesn’t scare me once I know it,” the former child actress continued. “When I finally said what I was going to say, I wanted to know everything about it and it took the fear away.”