Internationally famous for his award-winning, 3 Michelin starred The Fat Duck in Berkshire, England, Heston Blumenthal is considered to be one of the best chefs of his generation. Although self-taught, he has pushed the boundaries of a traditional kitchen and completely changed the way people approach cooking. Through his dedication to creativity, science and precision, along with his relentless research into nostalgia and the history of British gastronomy, Heston has pioneered new techniques through multi-sensory cooking, flavor encapsulation and food pairing. He is a Fellow of The Royal Society of Chemistry and The Royal Academy of Culinary Arts. He was awarded an O.B.E. by Her Majesty the Queen for his services to British Gastronomy.

“Welcome to a strand of my cooking that you might not be familiar with,” the chef writes. “I’m a self-taught chef, and I know how frustrating and perplexing cooking can be. So I’ve always been keen to demystify the process.”

Unlike other Michelin-starred masters, Blumenthal learned to cook at home from cookbooks. In the kitchen at The Fat Duck, Blumenthal has pioneered many scientific and culinary advances, allowing diners to enjoy imaginative dishes such as Jelly of Quail with Crayfish Cream and cocktails like the Nitro-Poached Vodka and Lime Sour. Outside the kitchen, he applied this inventive mindset to his most-remembered feat: cooking whole hog sous vide in a hot tub.

Chef Heston Blumenthal has been described as a culinary alchemist for his innovative style of cuisine. His work researches the molecular compounds of dishes so as to enable a greater understanding of taste and flavor. His restaurant The Fat Duck, in Bray, Berkshire, was awarded three Michelin stars in 2004 and voted the Best Restaurant in the World by an international panel of 500 culinary experts in Restaurant Magazine's The World's 50 Best Restaurants 2005. He also owns the Hinds Head Hotel, a village pub in Bray. Heston Blumenthal lives in Berkshire with his wife and three children.

Heston Blumenthal has made his name creating such original dishes as Snail Porridge and Nitrogen Scrambled Egg and Bacon Ice Cream at his internationally acclaimed restaurant, The Fat Duck. In this book, Heston focuses his creative talent on reinventing some of our most well-known (and most abused) dishes.

Among the many adventures on his quest, he travels to Delhi and makes an MRI scan of the marinated chicken in his Tikki Masala; he discovers the secret to the ultimate crispy duck in Peking and experiments at home by inflating a Gressingham on a foot pump; he walks the Dickensian streets of Lambeth and learns how to capture the essence of a fish and chip shop in a perfume bottle, and he explores the Willy Wonka-esque Tate and Lyle factory and tastes some seventy-year-old syrup that proves an inspiration for the flavor of his treacle tart.

Blumenthal’s chips are found on the menus of gastropubs and restaurants up and down Great Britain but the recipe for these chips light and fluffy on the inside; shatteringly crisp on the outside was developed out of Blumenthal’s home from 1992, three years before he went on to open the now three-MICHELIN-starred The Fat Duck in Bray.

“To rethink the chip, it’s not a bad thing to be associated with,” muses Blumenthal, when asked how he feels about going down in history for perfecting the fry. “It was the first dish I ever created. It does have a special place in my heart.” A Scientific Approach To Cooking Behind his thick-rimmed glasses, the chef’s eyes sparkle with good humor and intelligence as he talks about his culinary career, his train of thought running on one after another. In the years since his initial foray into fries, he has made a name for himself at The Fat Duck as a pioneer in multi-sensory cooking, food pairing and flavor encapsulation by advocating a scientific understanding in cooking.

At the peak of the molecular gastronomy trend, Blumenthal was its poster child. “It wasn’t until the late 1990s and early 2000s that molecular gastronomy got taken up by the press and became about pipettes and spherification, foams and chemicals. It’s a complete and utter misunderstanding of the term molecular gastronomy,” he says. “Boiled egg is molecular gastronomy. Chefs are practical physicists we bash stuff, we mix stuff, we cook stuff. We do stuff that changes the molecules, we’re doing something physical to food.” It was that scientific approach that he took on his quest for the perfect chip in 1992. To achieve a chip with what he calls a “glass-like” crispy crust with a soft, fluffy center that didn’t become soggy when cooled, Blumenthal experimented with every factor involved in the cooking process, from the starch content of different varieties of potatoes to the type and temperature of the oil used. Finally, he settled upon the three-stage cooking process now known as triple-cooked chips.

The traditional method for cooking French fries is a two-stage process that involves first frying cut chips in oil at a lower temperature to cook them and then deep-frying at a higher temperature to crisp up the exterior. However, this means that the chips start to grow soggy almost immediately even before they are served as the moisture in the soft interior turns to steam and softens the crust. 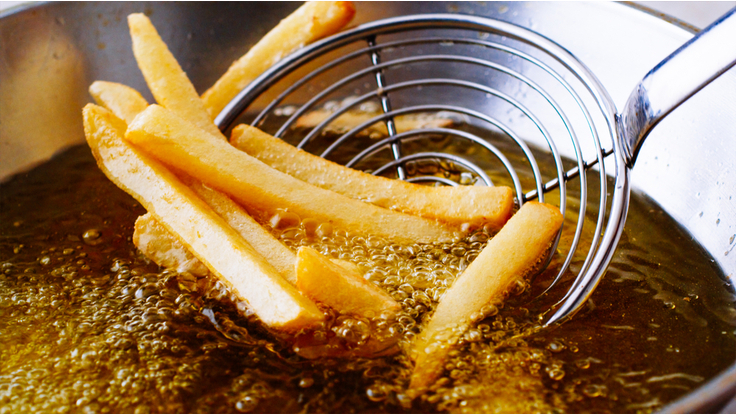 And so, Blumenthal set out to come up with a chip that would keep its crunch. His recipe calls for simmering cut potatoes the chef prefers dense, floury spuds like the Golden Wonder, Maris Piper, King Edward and Sebago in water first for 20 to 30 minutes until they are almost falling apart. This step is important because the cracks provide places for the oil to collect and harden during frying, which is what makes them so crispy later on. The potatoes are then drained and placed on a cooling rack to dry out and then into the freezer for an hour or so until all moisture is completely removed. The chips are then fried in small batches in a deep-fat fryer at 130°C till a light crust is formed, but not browned. Again, the fried chips are drained and placed in the freezer for another hour to eradicate all moisture. Finally, the chips are fried at 180°C for about seven minutes till they achieve a golden-brown crust.

Thinking aloud, Blumenthal runs through a laundry list of other signature dishes that he has come to be known for over the years, like Meat Fruit (chicken liver parfait masquerading as a mandarin), snail porridge, red cabbage gazpacho and the Sound Of The Sea, a dish where diners listen to the sound of waves and seagulls while dining on sashimi. “They’re milestone dishes I want to put on the wall at The Fat Duck. A timeline of events tracing the evolution of my cooking not just the dish but the research and what led to the dish coming about,” he says. "When that time comes, you can be sure that triple-cooked chips will have pride of place on that very wall."

In 2002, Heston made a series of six half-hour television programs called Kitchen Chemistry with Heston Blumenthal which were transmitted on Discovery Science along with a book Kitchen Chemistry, published by the Royal Society of Chemistry. They have recently been repeated on the Community Channel.

Blumenthal moved from the BBC to Channel 4 in March 2008, joining the channel's group of celebrity chefs which already included Jamie Oliver, Hugh Fearnley-Whittingstall and Gordon Ramsay. In January 2009 a three-part series of television programs on Channel 4 covered his efforts to revamp the menu at a Little Chef motorway restaurant on the A303 road at Popham. The Little Chef group extended Blumenthal's menu to 12 branches but, in 2013, removed his dishes from all restaurants.

In March 2009 Blumenthal began a short series of programs, called Heston's Feasts, showing themed dinner banquets. The second series of this was commissioned and began in 2010.

In January 2012, How To Cook Like Heston, aired on Channel 4. The program was aimed at home cooks and featured some of the more approachable techniques employed by Blumenthal.

In November 2012, Blumenthal fronted a television program for Channel 4 entitled Heston's Fantastical Food and has also been part of a new 2014 series of Heston's Great British Food, again commissioned by Channel 4.

In 2020, Blumenthal appeared as a judge in the Channel 4 series 'Crazy Delicious' alongside chefs Niklas Ekstedt and Carla Hall.