Streaming Guide for Bollywood actor Hrithik Roshan who has films like Kaho Naa Pyaar Hai, Koi Mil Gaya, Super 30 and Krrish among more to his credit.

Released in 2000, Fiza featured Hrithik as a terrorist and Karisma Kapoor played his disillusioned sister. Penned by Khalid Mohammed, the film revolved around Fiza (Karisma) who took upon herself the responsibility of finding her missing brother. When she finds him, Fiza learns he has joined a terrorist group and is on a deadly mission. Critics lauded Karisma and Hrithik’s performance in the film.

Action thriller Mission Kashmir dealt with unrest in the beautiful valley of Kashmir. It was the second time that Hrithik essayed the role of a terrorist. Film critics had a mixed response to the film. While some praised the movie for its portrayal of terrorism in Kashmir, some thought it failed to capture the beauty of Kashmir.

Apart from Anu Malik’s music, nothing much worked for the makers of Yaadein. Its timeworn narrative disappointed the audience after the trailer gave them high expectations.

You need not wait for Sundays when Kabhi Khushi Kabhie Gham airs on Sony Max as you can now watch it on Amazon Prime Video. Well, to me, it doesn’t matter if critics found the film unrealistic, watching it on my week-offs is still one of my favorite things to do. It gave Indian cinema some memorable moments, one of them being Rahul’s (Shah Rukh) entry and Jaya Bachchan sensing his footsteps and the other where Kajol and SRK’s son Krrish gives a speech, “Zindagi mein kuch banna ho…” taught to him by Hrithik.

With Aap Mujhe Achche Lagne Lage, Hrithik and Ameesha were not able to create the same magic on the big screen as they did in their debut film Kaho Na Pyaar Hai. Helmed by Vikram Bhatt, the film proved to be a disaster at the box office.

Na Tum Jaano Na Hum was another addition to the list of Hrithik’s flops. The romantic drama had a love triangle at the center of its plot. There’s absolutely no reason that you should stream this one even in your spare time.

Yash Raj Films production Mujhse Dosti Karoge showcased a love triangle between three best friends, played by Hrithik, Kareena, and Rani. With the film, Hrithik’s choice of films was again questioned as film critics failed to comprehend why the film was made. If you still stumble upon it, skip to the medley of songs that come towards the end.

Though this romantic drama was not supposed to be funny, it eventually turned into a comical affair courtesy Hrithik and Kareena’s overacting. Even after 16 years of its release, the film is etched in the memory of movie buffs as an over-the-top film. Mind you, this film is nothing like a Sooraj Barjatya film.

After a slew of flops, finally came Rakesh Roshan directorial sci-fi film Koi Mil Gaya which brought junior Roshan back in business. His role as a specially-abled boy Rohit Mehra won him accolades from across the world. Critics and the audience were impressed by his transformation from a blue-eyed romantic hero to an innocent boy. The film won Hrithik several awards.

Soon after the success of Koi Mil Gaya, Farhan Akhtar cast Hrithik in the military drama Lakshya. Set against the backdrop of the Kargil War of 1999, Lakshya had Hrithik transform from a carefree young boy to a determined army officer Karan Shergill. The film might not have worked at the box office in 2004, but over the years, it has found many takers.

The success of Koi Mil Gaya made Rakesh Roshan envisage a franchise and make superhero films. Both the films had Hrithik playing superhero Krrish, who is by far the most successful and loved superhero that India has witnessed to date. However, Krrish 3 failed in creating the same magic as Koi Mil Gaya and Krrish.

The second installment in the Dhoom series featured Hrithik Roshan as a master of disguise and a thief. Hrithik’s looks, breathtaking dance moves, and stunts left fans in awe of his charisma.

Filmmaker Zoya Akhtar’s debut film Luck By Chance might not have worked at the box office but it is a must-watch. The film is a realistic take on the film industry and points out everything which is wrong with Bollywood.

In Sanjay Leela Bhansali’s Guzaarish, Hrithik Roshan played magician Ethan Mascarenhas who becomes a quadriplegic after an accident. The film had Hrithik give one of his best performances.

If you wish to watch something pleasant and meaningful, turn to Zoya Akhtar’s Zindagi Na Milegi Dobara, a story of three friends who take a bachelor’s trip to Spain.

The remake of Amitabh Bachchan’s 1990s hit Agneepath had Hrithik acing the role of angry young man Vijay Deenanath Chauhan. Sanjay Dutt was appreciated for his role of Kancha Cheena.

An official remake of the 2010 Hollywood action-comedy Knight and Day, Bang Bang had all the prerequisites of a Bollywood masala entertainer. Bullets flying, cars exploding, stunning locations and an ensemble of good-looking actors made the audience drool.

Period drama Mohenjo Daro (2016) was panned for its historical inaccuracies. But director Ashutosh Gowariker defended his film and told HuffPost, “A section of the audience that saw the film in theaters like it. Those who saw it on television, they appreciated it too. And then there was a section of the audience who panned the film. It was because they had a certain imagination of Mohenjo Daro, which the film didn’t align with. Now, why did that happen? Did you know what Mohenjo Daro looked like, before the movie? No. You sat upon it after we made the film. It’s about perception and that in itself is very hard to change.”

Hrithik Roshan’s turn as a visually impaired man could not save this poorly scripted revenge drama. In her review of the film, The Indian Express film critic Shubhra Gupta wrote, “Can Hrithik Roshan act? No question about it. Can Hrithik hack it, in Kaabil, a film that gives him every opportunity to gain lost ground? That’s a toughie. Because apart from the leading man, there is not one thing to keep us with the film.” 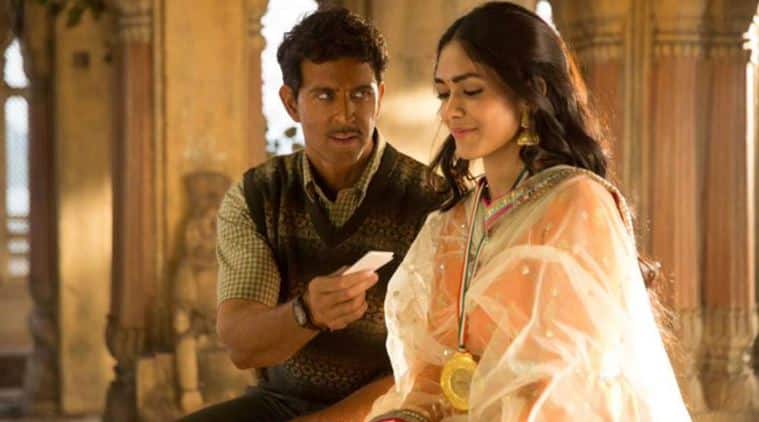 Based on the life of mathematician Anand Kumar and his program which trains underprivileged children for the IIT entrance examinations, Super 30 brought back Hrithik on the celluloid after a gap of two years. Despite a mixed response from critics, the film found favor with the audience and entered the 100 crore club.